Skip to main content
Towards a fair consumption space

Putting people and equity at the centre of the climate discussion

Lewis Akenji, Dana Vigran and Magnus Bengtsson, of the Hot or Cool Institute, outline their latest research on sustainable lifestyles.

The 1.5-Degree Lifestyles: Towards a Fair Consumption Space for All report continues the science-based approach of linking concrete changes in lifestyles to measurable impacts on climate change on order to keep with the 1.5-degree aspirational target of the Paris Agreement on climate change.

A lifestyles approach to tackling the climate crisis also puts people, rather than technology, at the centre of the solution.

In order to build a happy, healthy and sustainable future for ourselves, our children and future generations, we have to tackle the deeply interconnected crises of climate change and inequality.

The fair consumption space defines an ecologically healthy perimeter that supports within it an equitable distribution of resources and opportunities for individuals and societies to fulfil their needs and achieve wellbeing. It also outlines limits for over- and under-consumption. By defining a ceiling for per capita emissions for the nearly 8 billion human beings living on the planet today, the concept of a fair consumption space puts equity and wellbeing at the centre of the climate discussion.

With limited resources and a shrinking carbon budget, overconsumption by one person affects the prospects of another, and encroaches into another’s consumption space, requiring collectively working toward a more equitable distribution of limited carbon budgets.

Radical societal transformation will be required if we are to tackle the climate crisis head on, but we can use the concept of a fair consumption space as a guiding principle to spearhead the transition to a sustainable, low-carbon society.

Where we are and where we need to go

According to the latest IPCC assessment, starting from the beginning of 2020, the remaining carbon budget for a 50% likelihood of keeping warming to 1.5°C amounts to 500 GtCO2. The 1.5-Degree Lifestyles: Towards a Fair Consumption Space for All report breaks this down into an annual per capita target from now until 2050. The current global average lifestyle carbon footprint is 4.6 tCO2e. In comparison, we need to aim for a lifestyle carbon footprint target of 0.7 tCO2e by 2050 (with intermediary targets of 2.5 and 1.4 tCO2e by 2030 and 2040, respectively) to limit warming to 1.5°C above pre-industrial levels, the aspirational target of the Paris Agreement. These targets are in line with the aim to reach global peaking of GHG emissions as soon as possible and limit warming without relying on the extensive use of negative emission technologies.

For example, an average person in Canada, the country with the highest per-capita emissions among the economies studied, was found to have a lifestyle footprint six times larger than a person in Indonesia. The other high-income countries studied (Finland, Japan, and the UK) were found to have around 70% larger footprints than the three more prosperous middle-income countries included in the study (China, South Africa, and Turkey).

These results lay bare the extent of global inequality - both economic and resource based - and confirm the well-known relationship that greenhouse gas emissions are strongly linked to per-capita national incomes. They also show massive gaps between current per-capita footprints and the required sustainable targets. 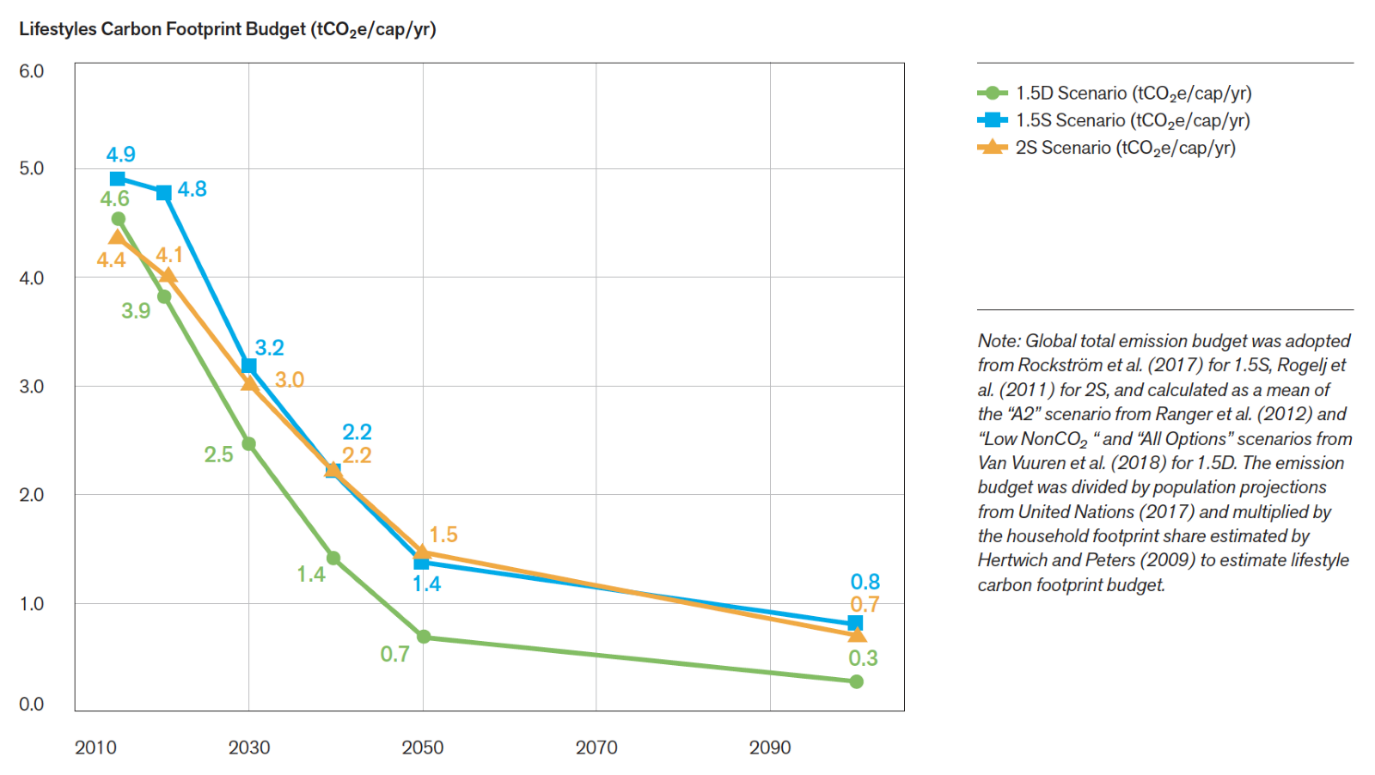 How can we get there?

There are several key learnings we can utilise to enable the societal transformation needed to set us on the path towards a 1.5°C future. First, the data compiled in the report shows key sectors that have the largest carbon footprint and identifies high impact actions to cut emissions. Second, the report outlines two separate emissions reduction scenarios for each country analysed, one focused on systems change and another on behavior change. The data shows clearly that neither scenario alone can achieve the emissions reductions required; we need both systemic change and behavior change working in parallel to limit warming to 1.5°C. Third, the report offers specific recommendations for policy approaches that have the potential to kick-start the transition to sustainable living.

The report explores impacts of consumption in six domains: food; housing, transport; goods; leisure; and services, and uses these to aggregate total lifestyle carbon footprints and reveal hotspots in the ten surveyed countries.

The three domains of food, housing, and personal transport tend to have the largest impact (approximately 79%) on total lifestyle carbon footprints. Therefore, focusing efforts to change lifestyles in relation to these domains would yield the most benefits.

Figure 2: Carbon footprint and its breakdown between consumption domain and globally unified targets for the lifestyle carbon footprints 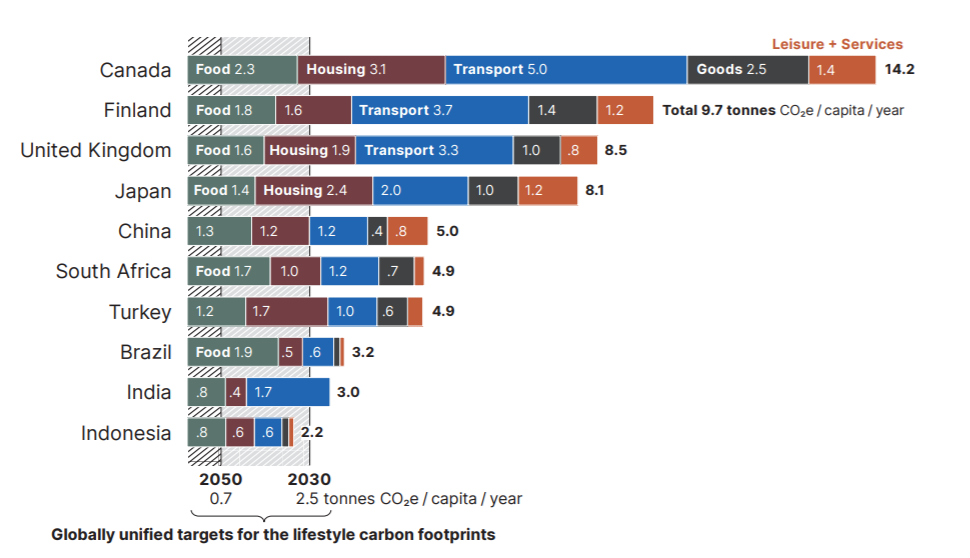 Note: Average lifestyle carbon footprint of country estimated as of 2019. The vertical lines indicate 1.5D footprint targets for 2030 and 2050 (1.5°C without/less use of negative emissions technologies).

Practical solutions will require three parallel types of efforts: absolute reductions in high-impact consumption (such as flying and driving less); modal shifts towards more sustainable options (such as shifting from driving to public transport or biking); and efficiency improvements (such as shifting to electric cars)—to use three examples from the transportation realm.

Some of the most impactful emissions reductions options include car-free private travel, reduction of international flights, electric cars, vehicle fuel efficiency improvement, living nearer to workplace, renewable grid electricity and off-grid energy, vegetarian-vegan diets and substitute red meat. If these options are fully implemented, they could reduce the footprint of each domain by a few hundred kg to over a tonne annually. Ultimately, the most effective interventions across lifestyle subcategories will be reducing car travel, air travel, meat consumption, and fossil-based energy usage.

Why we need both systemic and behavioral change

Most prevailing climate scenarios underplay the potential contributions of lifestyle changes to climate change mitigation and focus mainly on developing new technologies and on changes in production. But failing to shift the lifestyles of nearly eight billion human beings means we can never effectively reduce GHG emissions or successfully address our global climate crisis.

To present indicative pathways, this report analyses scenarios through which countries can meet the 2.5 tCO2e target for 2030. For each country it presents two scenarios: one with priority on systems change (adjusting carbon intensity of lifestyles options) and a second with priority on behaviour change (adjusting volume of consumption). Both intensity and amount adjusted carbon budget scenarios highlight the urgency of drastic lifestyle carbon footprint reductions in high-income countries, as the needed footprint reductions of 69–86% require almost full (at least 95 %) adoption of low-carbon lifestyle options in all countries. Canada was an exception, as it is not able to meet the 2.5-ton target even with full adoption of the options applied in this report. Upper and lower-middle income countries also need lifestyle carbon footprint reductions of 23–50% by 2030, but pathways allow more freedom in terms of chosen actions and adoption rates, as well as the possibility for focusing on country-specific hotspots.

The results highlight the significance of the lifestyle changes required across consumption domains in order to implement the Paris Agreement, and also imply it is not an either-or question of technology or lifestyles but rather both – improvements to the energy system and technology as well as shifts in consumption patterns are required to achieve the ambitious climate targets.

With a diminishing carbon budget amid impacts of climate change already being felt, growing social tension exacerbated by vast inequities in society, and a short timeline for action, we need every tool in the box, including options that may seem politically challenging. The report highlights a number of policy frameworks that may help society transition towards a fair consumption space within planetary boundaries. These recognise that significant lifestyle changes are, however, only possible if they occur within broader system change in the underlying economic and social conditions, and that the burden of change also includes communities, businesses and institutions, and government agencies.

One key approach is taking out the unsustainable consumption options, through 'choice editing'. Choice editing is a traditional government approach that has been primarily applied through the lens of public safety, health and security. However, with sustainability becoming an existential issue, governments need to incorporate this into their choice editing criteria. High impact options such as fossil-fueled private jets and mega yachts, excessive meat consumption and customer loyalty programs that encourage unnecessary frequent flying and stays in wasteful hotels need to be edited out, while innovation for more sustainable alternatives would need to be edited in.

A second approach requires setting limits for environmentally harmful consumption and staying within those limits. The report asks the question of whether the time has come for carbon rationing. Rationing has been used in the past as a tool to regulate water shortages in times of drought, to ensure equitable availability of fuel and food when limited. Carbon rationing is relevant, since existing policies and programs are insufficient for meeting carbon reduction targets, and second because it is a policy idea that meets calls for socially just action on climate change.

The report also recommends a set of policy approaches that aim to ensure a more equitable wellbeing-based society. One such recommendation is a sufficiency-based approach to policy design which shifts the focus from technology and economic growth mechanisms to what is needed to increase wellbeing for all. Implicit in the sufficiency-based approach is the need for social innovation, to find new ways of meeting our needs within Earth's regenerative capacity. Another recommendation to ensure equity and guarantee access to basic needs for all, is to go beyond universal basic income and implement universal basic services (UBS). UBS are underscored by a social guarantee, which recognises that everyone has basic human needs - shelter, sustenance, health and care, education, local transport, information access, and legal support - that must be met in order to allow them to participate with dignity in society.

The full report 1.5-Degree Lifestyles: Towards a Fair Consumption Space for All and annexes are available for download from: https://hotorcool.org/1-5-degree-lifestyles-report

Dr Lewis Akenji is the Director of the Hot or Cool Institute based in Germany, where he has led work on what lifestyles compatible with the 1.5 degree climate target look like. 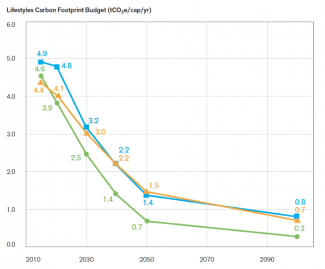