Dr Philip Webber, SGR, summarises the extremely serious dangers of our continued deployment of nuclear weapons around the world, in this article first published on the Metro website.

The idea of humans blowing up the world sounds like a statement from an evil scientist but is it true? The answer is yes, unless we are very, very lucky.

The nuclear armed nations have effectively created a global ‘Doomsday machine’, built with 14,000 nuclear weapons. Most (93%) have been built by Russia and the US. 3,400 of them are ready to fire within hours. [1]
Pre-programmed targets include main cities as well as a range of military and civilian targets across the world primarily in Europe (including the UK), US, Russia and China but also in Japan, Australia and South America. [2]

One nuclear blast, one mistake, one cyber-attack could trigger this Doomsday machine.

But first a reminder about the incredible destructive power of a nuclear weapon. Modern nuclear warheads are typically 20 times larger than either of the two bombs that obliterated Hiroshima and Nagasaki at the end of the Second World War. [3]  What just one nuclear warhead can do is unimaginably horrific. Here we describe the key impacts of a Russian SS-18 RS 20V (NATO designation ‘Satan’) 500 kilotonne warhead if used on a UK city. US submarines deploy a similar weapon – the Trident II Mk5, 475 kilotonne warhead. [4]

A deafening, terrifying noise will be created, like an intense thunder that lasts for 10 seconds or longer. After a blinding flash of light bright enough to destroy the retina of anyone looking, and a violent electromagnetic pulse (EMP) knocking out electrical equipment several miles away, a bomb of this size quickly forms an incandescent fireball 850 metres across. This is about the same height as the world’s tallest building, the Burj Khalifa. Drawn against the London Canary Wharf financial district or the Manchester skyline, the huge fireball dwarfs One Canary Sq. (240m), the South Tower Deansgate (201m) and the Beetham Tower Hilton (170m).

The fireball engulfs both city centres completely, melting glass and steel and forms an intensely radioactive 60m deep crater zone of molten earth and debris. A devastating supersonic blast wave flattens everything within a radius of two to three km, the entire Manchester centre, an area larger than the City of London, with lighter damage out to eight km. Most people in these areas would be killed or very seriously injured.

Whilst this scale of destruction is horrific and hundreds of millions of people would be killed in a few hours from a combination of blast, radiation and huge fires, there are also terrible longer-term effects. Scientists predict [8] that huge city-wide firestorms combined with very high-altitude debris clouds would severely reduce sunlight levels and disrupt the world’s climate for a decade causing drought, a prolonged winter, global famine and catastrophic impacts for all life on earth and in the seas due to intense levels of ultraviolet radiation due to the destruction of the ozone layer.

But even at the level of a few hundred nuclear warheads, the consequences of a nuclear war would be extremely severe across the world far beyond the areas hit directly. A nuclear conflict between India and Pakistan with ‘only’ 100 small warheads would kill hundreds of millions and cause climate damage leading to a global famine. The sheer destructive nature of nuclear explosions combined with long lasting radiation, means that nuclear weapons are of no military use. ‘Enemy’ territory would be unusable for years because of intense radiation – especially when nuclear power stations and reprocessing plants are hit.

Even if your own country is not hit, radiation and climate damage will spread across the globe. No one escapes the consequences.

But the nuclear nations argue that they build and keep nuclear weapons to make sure that they are never used. After all no one would be stupid enough to actually launch a nuclear weapon facing such terrible retaliation? It sounds obvious. If you threaten any attacker with terrible nuclear devastation of course they won’t attack you. That might be true most of the time. It is very unlikely that any country would launch a nuclear attack deliberately. But there are two very major problems.

First, a terrorist organisation with a nuclear weapon cannot be deterred in this way. Secondly, there are several ways in which a nuclear war can start by mistake.

A report [9] by the prestigious Chatham House think-tank in 2014 documents 30 instances between 1962 and 2002 when nuclear weapons came within minutes of being launched due to miscalculation, miscommunication, or technical errors. What prevented their use on many of these occasions was the intervention of individuals who, against military orders, either refused to authorise a nuclear strike or relay information that would have led to launch. Examples include a weather rocket launch mistaken for an attack on Russia, a US satellite misinterpreting sunlight reflecting off clouds as multiple missiles firings, a 42 cent chip fault creating a false warning of 220 missiles being launched at the United States.

Such risks are heightened during political crises. The risk of mistake is very high because, in a hangover from the Cold War, the USA and Russia keep 400 and 860 warheads respectively ready to fire in a few minutes, in a ‘launch on warning’ status, should a warning of nuclear attack come in. [10]  These nuclear weapons form a dangerous nuclear stand-off – rather like two people holding guns to each other’s heads. With only a few minutes to evaluate a warning of nuclear attack before warheads would strike, one mistake can trigger disaster.

A similar nuclear stand-off exists between India and Pakistan.

There have also been recorded instances of a president being blind drunk, [11] launch control staff taking drugs [12] and even a murder with an assault rifle on a Royal Navy nuclear-powered submarine. [13]  And those are the cases that we know of.

A completely new risk is that of hacking or cyberwarfare creating a false warning or sending an electronic fire authorisation signal. Because of these risks, several Russian and US former nuclear commanders think that nuclear weapons should be taken completely off high alert. [14]

But the catastrophic humanitarian impacts of nuclear weapons justify a much stronger approach. Recognising this, in 2017, over 100 nations agreed a new treaty to ban the building, deployment or use of nuclear weapons. [15]

But so far, the nuclear-armed nations including the UK, are spending breathtakingly large sums building new warheads and missiles: around £200bn in the UK [16] and at least $1,200bn planned in the United States.

This is a scandalous waste of resources and scientific know-how, diverting precious resources from tackling the urgent and pressing need to reduce fossil fuel usage and avoid dangerous climate breakdown and for health and social care. And on top of this there is a risk of a global nuclear war now and every minute of every day. [17]

Of course, we haven’t destroyed ourselves yet, but nuclear weapons have only been existence for a relatively short period. One hopes that the risk of a nuclear war is very low. But it certainly is not zero. The idea that nuclear weapons confer any political advantage is thus a huge, expensive fallacy endangering us all.

To survive we need to dismantle and store 14,000 nuclear weapon component parts away before, through misadventure, the warheads destroy us.

Dr Philip Webber has written widely on nuclear issues and is Chair of Scientists for Global Responsibility (SGR) – a membership organisation promoting responsible science and technology.

This article was originally published on the Metro website under the title We will all end up killing each and one nuclear blast could do it.

2. Webber P (2017). Nuclear weapons: a beginner’s guide to the threats. Scientists for Global Responsibility. http://www.sgr.org.uk/resources/nuclear-weapons-beginner-s-guide-threats
Actual target lists are of course classified, but US officials have declassified and leaked several target lists which were part of its ‘Single Integrated Operational Plan’ (SIOP). The US plans give the president a range of targeting options in, for example, Russia, China, and the Middle East. For more details see:
Center for Public Integrity (2014). US targeting unaltered since 2008. https://publicintegrity.org/national-security/u-s-nuclear-targeting-unaltered-since-2008/
Wikipedia (2019). Single Integrated Operational Plan. https://en.wikipedia.org/wiki/Single_Integrated_Operational_Plan
Any nuclear-armed nation has similar plans. I have personally spoken to a target analyst at the UK Ministry of Defence. Russia, we have to assume, has drawn up similar target lists for major US military bases which are spread globally and include major radar, naval and communications bases in Japan, Australia, and South America. Target lists are ‘packaged’ into strike options. I explore these in some detail in a book:
Webber P (1990). New Defence Strategies for the 1990s. Macmillan.

4. For further details and references concerning the immediate effects of nuclear weapons, see section 5 of: Webber (2017) - as note 2.

7. The figure of a further 800 high alert warheads is made up of 400 US Minuteman warheads and 400 Russian (mainly SS-27) mobile ICBMs. Figures are best estimates taken from note 1. Some sources give higher numbers of high alert weapons, e.g. Nuclear Darkness (2019). US-Russian High-Alert Weapons. http://www.nucleardarkness.org/globalnucleararsenal/usrussianhighalert/

9. Chatham House (2014). Too Close for Comfort: Cases of Near Nuclear Use and Options for Policy. https://www.chathamhouse.org/publications/papers/view/199200

The nuclear armed nations have inadvertently created a global Doomsday machine, built with 15,000 nuclear weapons. Most (93%) have been built by Russia and in the US, 3,100 of them are ready to fire within hours. 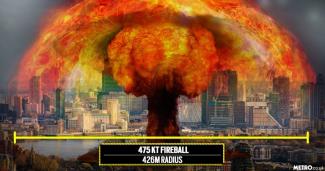