Summary of a presentation by Dr Aubrey Blumsohn, previously Senior Lecturer in Medicine, University of Sheffield, at the SGR conference, Universities for Sale?

Effective medicine requires honest science, transparent analysis of data and complete transmission of research findings. Pharmaceutical companies and medical device manufacturers sell products under the banner of science, usually with a veneer of university credibility. A large number of recent incidents have involved the collusion of university academics in the generation and propagation of false or misleading research. The consequent ‘scandals’ have been associated with many hundreds of thousands of deaths. A variety of statutory, scientific and professional regulatory bodies are interspersed in the relationship between industry and academia. The supposed remit of these bodies is to safeguard integrity. In many cases these bodies have failed to understand or support the scientific process, or have colluded with misconduct. This talk focused on the nature of incidents which have arisen, and the extent to which government and regulators collude with scientific fraud or misconduct at the university-industrial interface.

Until March 2006, Aubrey Blumsohn was Senior Lecturer at the University of Sheffield with research expertise in skeletal disease. In September 2005 he was suspended from his academic position for communicating serious concerns about scientific integrity to the media. His interests include the rights and obligations of scientific authors, the right of access to data, the nature of ‘data’ in science, the meaning of ‘confidentiality’ in research, and the role of an academic institution. 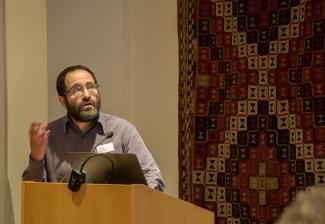