A new poll of scientists – many working in fields related to the climate emergency – reveals a current gap between awareness of international climate goals and action to align lifestyles with them, writes Andrew Simms, SGR. But there are signs that radical shifts in behaviour are now happening.

The indicative poll features in a new briefing, Scientists Behaving Responsibly: should science walk the talk on climate breakdown? which is published to coincide with the 2019 conference of Scientists for Global Responsibility (SGR).

Key highlights of the poll include:

“Meeting agreed international emissions targets and preventing climate breakdown needs systemic and behavioural change,” says Andrew Simms, assistant director of SGR, “Nearly two thirds of the changes needed to meet the UK national zero carbon target have been officially recognised as involving societal and behavioural change, but many of those changes are shaped by choices made more or less available by the energy, food and transport systems we live within. This poll shows scientists starting to make big life changes to walk the talk on climate breakdown, including getting involved in protest. Research on behaviour change shows that seeing people act differently matters. It is hugely influential in persuading others to make changes, creating a positive ‘social contagion’ effect. The lack of easily available low carbon alternatives was cited as the biggest obstacle to change.”

The survey responses in more detail...

We asked scientists, technologists and researchers a series of questions about the behaviours which are responsible for the bulk of personal carbon emissions and what changes, if any, they were intending to make.

87% of respondents said that they had considered the implications of the climate goals for their own lives. But this revealed an awareness / action gap as only around half, 52%, thought that their lives were aligned with the goals. Another 40% said no, they were not aligned and 8% said that they did not know. It is worth noting that ‘1.5°C compatible’ lifestyles are very hard to achieve given today’s energy intensive infrastructure.

In 2018, nearly half of the population of England (48%) took no flight at all according to the Dept of Transport. Generally speaking, people in higher income brackets – such as scientists or engineers – fly more. In our poll, more than one in three, 36%, said that 'not flying' was the best description of their approach to aviation. Just over 15% took one short haul flight per year, and over 26% took the equivalent of one long haul or two short haul flights per year. There were 13% taking the equivalent of two long haul or 4 short haul flights per year and over 9% taking more than that. But when asked about their likely behaviour in the future, the number planning to not fly at all grew to just over 48%.

One in five owned a car but were taking ‘very serious’ steps to minimise its use and impact, such as working from home, lift sharing or switching to an electric car. Another combined 37% were taking either sizeable or limited steps to reduce the impact of their car use. When asked about their car use in the future, there was a big shift upwards in the group saying they would take ‘very serious’ steps to the impact of their car use – from 20% to 39%.

Respondents reporting that they followed plant based vegan diets whilst also actively seeking to minimise their food waste stood at 7%. But a much larger 29% declared that they followed the next least impact diet, following a ‘largely’ plant based diet while reducing food waste. A slightly larger group, 32%, declared that they followed a diet which might include smaller than average amounts of meat, fish and dairy. Asked about what behaviours they would choose in the future, people opting for a vegan diet went up to 13%, and the next most low carbon option moved from 29% to 39%.

We next asked people about how the climate issue influenced their approaches to family life. Nearly 1 in 3, 31%, said that this issue led them to avoid having children. Another 8% said it made them chose to plan to be a one child family, and further 15% said that it meant them ‘limiting’ the size of their family.

After considering this range of options for behaviour change, we asked what were the factors holding people back from making such changes. Respondents were offered a range of options and were able to choose more than one factor. The biggest obstacle cited was the lack of easily available alternatives, with 65% of respondents giving this reason. Cost was the next most common reason given, but with only 34% referencing it. Then, 26% cited the belief that it was the job of government and / or industry to make the necessary changes, 22% giving reasons to do with family life, and 11% resistance from employers.

Lastly, we asked respondents to tell us about the best and worst examples of walking the talk on climate action, or not.

Among the ‘best’ examples quoted, not flying was the most common, followed closely by taking part in protest actions. Several people mentioned shifting to plant based diets, and several also mentioned inspirational leadership from individuals making bold life choices themselves. In this case, Greta Thunberg was mentioned several times, as was the climate scientist Kevin Anderson. Several respondents talked of choosing to limit family size and one of the pride taken in maintaining a bicycle in use that was built before 1970. One respondent summed up the holistic nature of the challenge writing: ‘Being a role model in all aspects of life: reducing waste, sustainable fashion choices, local plant based food consumption, not buying anything new. Travelling only for research or familial purposes and being open about the fact that it’s not sustainable.’ Several university departments and the Met Office were mentioned for transport policies that sought to encourage more sustainable choices including taking the train from London to Vienna for a conference.

In highlighting some of the more egregious examples of examples of anti-environmental behaviour, the examples were in many cases the reverse of the best examples, such as flying a lot. But this question also raised issues around accepting sponsorship and other funding from fossil fuel companies, driving SUVs and examples of conspicuous consumption. Waste and advertising were also mentioned. One person with courageous honesty highlighted themselves as a ‘worst’ example. The duplicity of oil companies who say that they acknowledge the problem but continue to explore for and develop new oil and gas fields was specified too. The consideration of a ‘Space Port’ by a county council in the English South West was cited. But perhaps the last word should go to the respondent who said that the worst examples was, ‘saying that the present crisis has nothing to do with me.’

This was a straw poll disseminated to specialist scientific audiences including SGR’s own membership and those who follow the international climate negotiations. There were 153 responses. In order to have a sense of the specialisms of respondents we asked them to describe the broad sectors in which they worked. Of those who replied, 47% described themselves as scientists or engineers working in a climate related field, 36% were scientists or engineers not working in a climate related field, 6% were students of science or engineering in a climate related field, 4% students in other areas of science and engineering and 7% identified themselves as non-scientists / engineers. Of all the respondents, just under 39% were professional, associate or student members of Scientists for Global Responsibility.

Andrew Simms is Assistant Director of Scientists for Global Responsibility, and co-ordinator of the Rapid Transition Alliance. 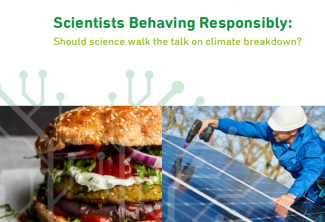