Skip to main content
A new phase for ‘offensive insecurity’?

Dr Stuart Parkinson, SGR, gives an overview of the UK’s new military and security strategies, and highlights the increasing focus on militarism.

The government published its new combined National Security Strategy (NSS) and Strategic Defence and Security Review (SDSR) in November 2015.1 When SGR critically examined its 2010 predecessor – especially the role of science and technology within it – we pointed out that its emphasis on ‘force projection’ and limited attention to tackling the roots of conflict pointed to a strategy of ‘offensive insecurity’.2 So what has changed in the 2015 document?

The most prominent aspect of the new strategy is the marked increase in military equipment spending planned for the next 10 years. There is to be a rise of £12 billion to the enormous total of £178bn – at a time when many areas of government spending, such as welfare and environmental protection, are being drastically cut. The spending will enable Britain to:

While there are some technologies which could be argued to have a mainly defensive role – such as the maritime patrol aircraft – the main focus is clearly on an increase in offensive capability or, as the Ministry of Defence prefers to call it, ‘expeditionary capability’. The justification for this marked increase in militarised force posture is the ‘resurgence’ of Russia, the rise of Daesh/ Islamic State in Iraq and Syria, growing instability elsewhere in the Middle East and North Africa and the related threat of international terrorism. These threats, the government argues, requires Britain to take a more aggressive role in international affairs. Such a position is emphasised by the parliamentary vote in early December to begin air strikes in Syria against Daesh forces, in addition to those already being carried out in Iraq.

The industries that will manufacture all this new equipment will be given enhanced support from government to access new funding (especially for exporting), build partnerships with corporations not yet involved in military work, train new engineers and scientists (especially through apprenticeships), and build stronger links with universities.

The increased concerns about cyber-security threats also mean that government funding in this area will continue its rapid rise. One consequence of this that is already clear is that more military corporations are becoming involved in civilian security work.

Despite the emphasis on the role of armed approaches, there are some notable non-military aspects to the NSS/SDSR.

One example is that the UK’s spending on overseas aid is to be maintained at the international target of 0.7% of Gross National Income, and at least half the funds will be directed to ‘fragile nations’ in which conflict may arise. Conflict prevention measures will be financed by a Conflict, Stability and Security Fund with a budget of nearly £6bn over five years.

The NSS/SDSR also states that “Climate change is one of the biggest long-term challenges for the future of our planet.” As such, the five-year budget for the UK’s International Climate Fund – aimed at helping developing nations with both adapting to climate change and investing in greener technologies – is to be increased to £5.8bn.

The growing fears about terrorism and Russia have led to a traditional response among UK policy-makers that emphasises the ‘hard power’ option of developing and deploying lots of military technology. Yet this response is being constrained by a budget that is at historically low levels, just above 2% GDP. Spending pressures have thus helped to encourage the government to also expand some conflict prevention efforts, especially via overseas aid and climate-related budgets. Nevertheless, the failings of the NSS/SDSR are serious.

Firstly, there is a continued lack of recognition that deploying more UK military forces in Middle East can fuel the cycle of violence. There is a disturbing lack of acceptance about the failures of previous Western ‘military interventions’ in Iraq, Afghanistan, and Libya. While British humanitarian aid to the region is very welcome, the attention given to other security measures – such as cutting off funding pathways to Daesh, strengthening border controls to prevent foreign fighters entering war zones and diplomatic efforts to achieve ceasefires – are far too limited.

Secondly, there is a refusal to recognise that UK arms exports to authoritarian regimes are fuelling armed conflict, undermining human rights and leading to civilian deaths. For example, it is likely that UK-made weapons have been used by the Saudi Arabian-led coalition in its increasingly indiscriminate military campaign in Yemen.3 Against this background, the stated aim of the NSS/SDSR to “Maximise prosperity opportunities from our defence... activities” looks irresponsible in the extreme.

Thirdly, there is a failure to appreciate the urgency of environmental threats. The lack of preparedness in dealing with the December 2015 floods has once again focused public attention on the chronic underfunding of flood defence/ prevention measures. Meanwhile, the NSS/SDSR demonstrates a lack of understanding of the full scale of the climate change threat – and the importance of a UK lead in cutting carbon emissions – an attitude which is sadly prevalent across government (see here).

Finally, there is no acknowledgement of the threat to international security created by the continued deployment of nuclear weapons by the UK – or the USA and France (see here).

In summary, the welcome increase in funding to help tackle the roots of conflict is being thoroughly swamped by the much larger increase in spending on militaristic approaches. Ethically-concerned engineers and scientists will have to work even harder to avoid being co-opted into this agenda. 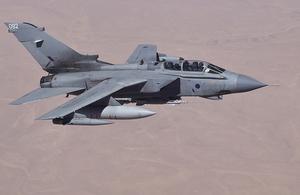