Skip to main content
The industrialisation of war: lessons from World War I

Dr Stuart Parkinson, SGR, examines how technological innovation contributed to one of the most devastating wars in human history – and asks what lessons we should take from this.

2016 is the centenary of two of the bloodiest battles of World War I: the Somme and Verdun. And WWI itself is one of the most destructive wars in human history. As an example of the carnage, the total death toll of the war has been estimated at over 15 million people between July 1914 and November 1918 – an average of about 3.5m per year. Only the Russian Civil War and World War II had higher annual death rates. [1] [2] The centenary is therefore an important opportunity to reflect on a conflict in which rapid developments in technology led to a huge increase in the devastation that could be caused by war.

In this article, I examine which technological developments led to the most casualties and what lessons we can draw about science, technology and the military today.

Harnessing the Industrial Revolution for war

The late 18th and 19th centuries saw a rapid development in technology which we now, of course, refer to as the Industrial Revolution. Starting in Europe, major developments transformed a wide range of industries. Growing exploitation of minerals like coal and iron were especially important, as was the advent of the steam engine – especially in ships and trains.

It was not long before the military started harnessing some of these inventions. Mass production in factories churned out not only large numbers of standardised guns and bullets, but also boots, uniforms and tents. [3] The guns were more reliable and hence more accurate. A bullet was 30 times more likely to strike its target. Developments in transport were also utilised, with steel becoming standard in battleships and trains starting to be used to quickly ferry large numbers of troops to war zones. Advances in chemistry led to new high explosives.

The first wars in which these new military technologies were used on a large scale included the Crimean War (1854-56) and the American Civil War (1861-65). Both of these provided a taster for the carnage of WWI, being characterised by trench warfare in which frontal assaults against well-defended positions led to massacres of infantry soldiers.

In the years running up to the outbreak of WWI, there were several key developments in military technologies that would lead to high casualties during the war itself.

Arguably the most important were new high explosives. Gunpowder had been the explosive of choice in war for around 500 years, but new developments in organic chemistry by Alfred Nobel and others led to new materials, initially used in mining. Further work in the late 19th century especially in Prussia/Germany, Britain and France refined the materials for use in hand-guns and artillery. Most successful were Poudre B and Cordite MD which burnt in such a way as to provide the required directed pressure needed to propel a projectile, without blowing up the weapon. [4]

Developments in gun manufacture were also crucial. Muskets were being replaced by rifles, which were more accurate. Machine guns were also brought onto the scene, first invented in the USA. By 1914, the most widely used machine gun was the British Maxim, capable of firing a shocking 666 rounds per minute. [5]

New artillery was also developed to use the new explosives. By the outbreak of WWI, a single shell weighing one tonne could be propelled more than 30 kilometres. However, smaller and more mobile guns were preferred as these could accurately fire a shell every three seconds. [6]

The development of weapons using poisonous gases was limited by the Hague peace conference of 1899. However, this only limited the development of the delivery systems rather than the gases themselves, in which Germany, Britain and France all had active research programmes. [7]

The development of the submarine and the torpedo would also prove to be crucial. Work in France and the USA led to the first successful military submarines, with Britain, Germany and Italy quickly commissioning their own. At the start of the 20th century, there were about 30 military submarines. This number would rapidly grow. The main weapon of the submarine immediately became the torpedo, invented in Britain. An early demonstration of the effectiveness of this weapon was in a Japanese attack on the Russian fleet in 1904. It was then rapidly deployed by all the major powers. [8]

The other major development in military technology that occurred in the years running up to 1914 was the steam-driven battleship. The first was the Dreadnought, launched by the British in 1906. Heavily armed and fast, it helped to cement Britain’s naval dominance. However, other naval powers, especially Germany, developed their own more powerful battleships during a rapid naval arms race in the pre-war years. [9]

Helping to fuel these arms races were not just competition between national militaries and technological innovation, but also international commerce. Major private corporations such as Vickers and Armstrong in the UK and Krupp in Germany made huge profits from arms sales, including major contracts with governments which would later become the ‘enemy’. [10]

Key technological developments during the war

After WWI broke out, in summer 1914, the pressure rapidly grew for the warring nations and their scientists and engineers to try to create ‘military advantage’ through innovation. The main areas were diverse, including trench construction, artillery and its targeting, poisonous gases, submarines, tanks and planes.

In terms of artillery, perhaps the most important development during the war was the scaling up of production of the heavy guns which had begun to be deployed by militaries before 1914. Many thousands of these weapons, such as the British 18 Pounder and the French 75mm, were produced. [11] Also important was the development of improved targeting – such as ‘sound-ranging’. These developments led to artillery use on an unprecedented scale. For example, during the Meuse-Argonne campaign – part of the final Allied advance in 1918 – US forces were firing an incredible 40,000 tonnes of shells each day. [12]

Mass production also led to the machine gun being a widely used and devastating weapon, especially in defending trenches. For example, the British favoured the Lewis gun whose numbers increased nine-fold between 1915 and 1918. [13]

German research resulted in the first use of lethal gas in the war – in this case, chlorine – in April 1915. [14] Further development work led to Germany deploying phosgene and mustard gas later in the war. Britain’s first use of lethal gas was in September 1915, although it never used it on the scale that Germany did. However, poisonous gases proved to have limited military value – due to their dependence on weather conditions and their countering through, for example, gas masks. Gases also proved to be significantly less lethal than more conventional weapons. [15]

There was rapid development of military aircraft during WWI, although their role in the conflict remained largely marginal. [16] Planes and airships were adapted to drop bombs, but their main role was reconnaissance, especially spotting the location of enemy artillery.

Submarine development also proceeded quickly during WWI. Germany, in particular, favoured this sort of weapons system, given British superiority in surface warships. By the war’s end they had built 390 ‘U-boats’, and used them to devastating effect, especially from early 1917 onwards when they resorted to ‘unrestricted’ submarine warfare to try to cut off Britain’s maritime supply routes. About four million tonnes of shipping – much of it crewed by civilians – was sunk in little over a year. [17]

In military terms, arguably the most decisive new technology of the war was the tank. First deployed by Britain in 1916 with the aim of overrunning trenches defended by barbed wire and machine guns, it did not initially prove effective. However, further innovation and mass production led to Britain and France each deploying several hundred from the summer of 1918. They proved critical in driving back German forces. [18]

Which weapons were the biggest killers?

Estimating casualty rates in war is a notoriously difficult exercise, especially when analysing data from a century ago. Nevertheless, World War I historians and other researchers have uncovered a range of information which allows some assessment to be made of the most lethal technologies.

Overall, based on a range of sources, researcher Matthew White has estimated that approximately 8.5 million military personnel and around 6.5m civilians died in World War I. [19] Wikipedia researchers have provided comparable estimates. [20]

Within the military totals, the overwhelming majority of deaths (and injuries) were borne by armies, with naval deaths being only a few percent of the total. [21] Of land-based deaths, the evidence points to artillery being by far the leading cause, followed by machine guns. For example, historians Stephen Bull, [22] Gary Sheffield, [23] and Stephane Audoin-Rouzeau [24] quote a range of official figures that indicate between 50% and 85% of casualties on the battlefield were due to artillery fire.

Civilian deaths – which are much less certain – were overwhelmingly caused by malnutrition and disease, as a result of shortages due to the effect of battlefields, blockades and damage to infrastructure caused by the war. Hence, no single weapons system can be identified as the cause in those cases. Nevertheless, artillery and machine gun fire still resulted in large numbers of civilian casualties.

Drawing on sources already quoted, I estimate the following overall numbers of deaths due to different weapons systems. I must emphasise these have high levels of uncertainty.

A further 5m civilians are thought to have died due to malnutrition and disease.

Lessons from the carnage of the World War I continue to be hotly debated, but I want to offer some especially related to science and technology.

Historian John Keegan points out that there was rapid technological development in weapons systems in the years before WWI, in contrast to that in communications. [25] As such, the means to wage war on an unprecedented scale was readily at hand when the international political crisis struck in summer 1914, whereas technologies which political leaders could use to clarify and defuse the situation (e.g. high quality person-to-person phones) were not.

Today, the rapid pace of development in communications technologies is outpacing much in the military field – indicating that perhaps some lessons have been learned about the importance of communication in helping different peoples understand and trust one another. However, militaries are harnessing some of those communications technologies to help revolutionise warfare, an obvious example being the remote piloting of ‘drones’. New international arms controls are urgently needed in this area.

This brings me to another key lesson. 100 years on from the Battle of the Somme, artillery is still being used to devastating effect in many parts of the world – with the carnage of the Syrian war being an obvious example. Campaigners are attempting to get their use restricted under existing international disarmament treaties, but governments are currently showing little interest. [26]

A further lesson concerns the international arms trade. A lack of controls in the years before WWI allowed private corporations to profit from arming both sides. While a new international Arms Trade Treaty was agreed in 2013, its currently weak provisions still allow a major trade which fuels war and repression across the world. [27]

The overarching conclusion is that allowing militaries to play a significant role in scientific research and technological development was a major driver of world war 100 years ago, and it still creates major dangers today. We need to prioritise using science and technology to support and strengthen disarmament processes across the world – that would be the best way of commemorating the fallen from the century past.

Dr Stuart Parkinson is Executive Director of Scientists for Global Responsibility, and has written widely on the links between science, technology and militarism.

Thanks to Daniel Cahn for valuable help with research for this article.

[10] On the Record/ Campaign Against Arms Trade (2014). Arming All Sides. http://armingallsides.on-the-record.org.uk/ 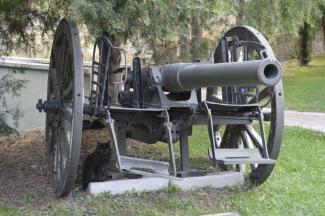