Skip to main content
Do we need an Office for Science Responsibility?

Andrew Simms and Dr Philip Webber, SGR, argue that the failure to follow principles of responsible science during the Covid-19 crisis compromises policy-making and threatens to undermine public trust.

The first blog in this series identified several implications for governments internationally and public policy. The second looked further at the impacts emerging from the Covid-19 pandemic and the implications for other global threats requiring urgent action.

We need to talk about responsible science in government

One of the UK government’s former chief scientific advisors, Professor Sir David King, has been so disturbed by the current government’s handling and interpretation of scientific advice through the official Scientific Advisory Group for Emergencies (SAGE), that he has set up a separate, independent panel of his own.

He was provoked by statements made with the apparent seal of approval from SAGE that ran counter to infection control measures adopted more widely by the international community, such as advice given concerning the wearing of face masks in public. His concern is understandable. The Johnson government’s early flirtation with ideas of herd immunity already troubled many.

Being able to assess the advice given to government means living-up to certain scientific principles against which SAGE itself appears to stumble. Firstly, you have to know who is giving the advice and what their relevant expertise is. But the secrecy and lack of general transparency around SAGE has prevented that. Next, you need to know what the actual advice is that has been given to government. Again, in spite of limited recent concessions in the face of criticism, SAGE fails because all its advice is not openly made public. Neither do we know the full range of affiliations and interests that might be represented at meetings and on the panel. A declaration of interests on even the most humble scientific journal article is today such common practice as to be taken for granted. The fact that it is missing from a process involving life-and-death decisions should be of the highest concern.

The case for an open science protocol

Responsible science is all about good process. Outcomes cannot be understood, tested or improved unless a transparent process has been followed. Yet where SAGE is concerned, we do not know how its members are appointed, who they are responsible to, or whether their work is subject to standard peer review.

In 2001 Scientists for Global Responsibility called for the introduction of an ‘Open Science Protocol’.  We were motivated by instances such as the 1988 case when it was discovered that a Veterinary School’s work had been bent towards work on respiratory diseases for biological warfare. The resultant controversy led to the resignation of at least one researcher.

We argued for the protocol on the basis that: ‘Openness is an essential element of science. The detailed basis of any scientific truth claim must be open to scrutiny, criticism, repetition and refutation. The weaker this openness, the weaker is the claim.’ For the public to have faith in the things asked of them by government, whether it means changing your behaviour through physical-distancing to help prevent the spread of a pandemic, or travelling less by fossil fuel powered transport to address the climate emergency, it is vital to for there to be very high confidence in what we described as ‘well-established scientific findings (what some call 'objective facts' and science-studies specialists often call 'reliable knowledge')’.

That is difficult when, with SAGE at present, full membership, minutes, and who participates are not openly published, and we only first discover such information from a series of leaks and unattributable opinions and views.

The dangers of lacking transparency

At the moment, we do not even know the findings of the report into the National Health Service’s 2016 Exercise Cygnus, the simulation operation designed to reveal the UK’s state of readiness for a pandemic outbreak. We do not know if it revealed a high state of unpreparedness, and hence a high degree of culpable negligence by the government, because it is not in the public domain. This is in addition to the 2018 biological security strategy that was not properly implemented.

Especially where the science relating to public health and well-being is concerned, responsible practice means having access to both majority and minority opinions from groups with official advisory roles.

Members of Parliament themselves have to declare their interests in a public register, as do local authority officers and councillors, it is perverse that those who are in an official, scientific advisory role do not. There may be no conflicts of interest, but the public cannot have confidence if they do not know. Making matters worse, The Information Commissioner’s Office has suspended the obligation of public authorities to respond to Freedom of Information requests.

For us, responsible science means work conducted in the interests of improving human health and well-being in such a way that we do not compromise the conditions for other life on earth. It also means science practised according to the principles of openness described above. The work of SAGE and its sub-committees, including, for example, NERVTAG, focused on new and emerging respiratory viral threats, may conform to the former, but have fallen short on the latter.

In response to public criticism about the lack of transparency concerning SAGE, the government published details of its membership. However, from SAGE and its six sub-committees with a membership of at least 215 members, at least 25 were not identified, and even the total membership remains unknown. The members of NERVTAG are not in the newly released lists. Controversial, non-scientific figures such as the advisor Dominic Cummings are not listed, with other participants loosely referred to, but not specified from other organisations. Even the appearance of conflicts of interest are damaging. Ben Warner, for example, another attendee at SAGE meetings, is the brother of Marc Warner who won the contract for the NHS Covid-19 tracking app.

With its multiple committees, SAGE itself is so large that it is not clear how the body actually functions. Previous government guidelines on how advisory committees are set up and function include that membership should be transparent.

To implement greater openness, the government could, for example, introduce an official, independent body that mirrors the role of the Office for Budget Responsibility (OBR). The OBR provides 'independent and authoritative analysis of the UK’s public finances' as an official, independent watchdog. An Office for Science Responsibility (OSR) could perform a similar function - to oversee government science policy and its use of scientific research and advice. Not only could this improve the quality of subsequent decisions, it could also increase public confidence through raising transparency and accountability.

Theoretically there are Select Committees in Parliament designed to hold the Government to account. There is the Science and Technology Committee in the House of Commons, which describes its purpose as ensuring that policy making and decisions are based on ‘solid scientific evidence and advice’, and its equivalent in the House of Lords. But the work of select committees is usually exactly that, ‘selective’, they conduct reports and write enquiries on specific issues rather than offering comprehensive scrutiny. There is also a Treasury Select committee, yet it was still considered necessary to create the OBR. When created, it’s explicit mandate was ‘improving the credibility of fiscal (spending) policy’. It produces independent forecasts and comments on how realistic are the government’s own projections.The point is to counter any politically motivated spin. It is set up to report not just to government, but to the general public.

An OSR could function independently in accordance with, and to apply the principles of the Open Science Protocol to report on science policy and decision making. It would need to comprise the relevant range of expertise and for full transparency include civil society and exhibit proper gender balance and BAME representation. Another alternative would be to return to systems and practices where advisory committees have memberships specific to the issues they have expertise in, where that membership is open, and procedures transparent. One thing is clear, unless measures are taken to improve public confidence in the government’s use of scientific advice, they should not be surprised if the rest of the population becomes reluctant to follow it.

(Picture credit: Image by by PANKAJ YADAV from Pixabay.) 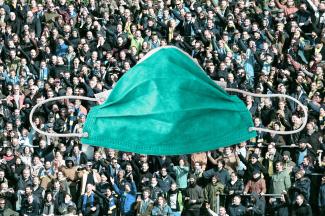