Barnaby Pace, Nuclear Education Trust, explores how international examples of defence diversification programmes show what a successful programme could look like in the UK – answering concerns about employment should the British nuclear weapons programme be cancelled or curtailed.

Norman Augustine, retired chairman of military contracting giant Lockheed Martin, famously said in 1995 that the experience of defence contractors moving into civilian production “has a record unblemished by success”. [1]

Augustine was wrong. A study [2] recently published by the Nuclear Education Trust (NET) identified valuable examples from around the world of defence diversification programmes which show important lessons in what can make such programmes successful.

Back on the UK political agenda

The issue of defence diversification – also known as arms conversion – has been back on the agenda in the UK with supportive statements from Labour leader Jeremy Corbyn and major trade unions, as well as engaged civil society activists.

Diversification is particularly relevant in the debate over the Trident renewal programme. One of the more frequent claims given in favour of replacing Trident, the UK’s nuclear-armed submarine programme, is that the programme is essential to maintain employment in certain areas. This argument is attractive to many in the trade union movement and Labour Party who might otherwise oppose Trident replacement on ethical or policy grounds. The issue, for them, is about the potential loss of highly skilled employment clusters in these areas.

Questions also remain about the project’s affordability and technical feasibility and, in addition, the political commitment to nuclear arms is not guaranteed given the numerous flaws in the policy of nuclear deterrence. There have also been serious questions raised over whether Trident’s submarine-based system is even workable in the future with rapid developments in submarine detection technology. For example, a scenario where swarms of unmanned underwater drones work together to track submarines is a distinct possibility in the next few decades. [3]

Shrinking employment in the arms sector

The hardship individuals and their families could face as a result of arms industry job losses is real and shouldn’t be underestimated. In the event of a change of government, Trident replacement could still be scaled back or cancelled entirely and the key questions then would be how severe is the impact on workers and what can be done to mitigate the harmful effects and capitalise on the opportunities?

Employment in the UK arms industry has been in decline for several decades. The arms industry lobby group ADS, estimates that in 2016 the industry directly employed 142,000 people in the UK. [4]  This is down from previous UK government estimates of 155,000 jobs in 2000/01 and 405,000 jobs in 1980/81. [5]  This decline is part of a long-term downward trend in employment in the UK arms industry due to the increasingly capital intensive nature of the work carried out, growing automation, globalised supply chains, limited increases in military spending and a highly competitive arms export market.

This decline clearly shows the failure of the long running UK government strategy to support arms industry workers by supporting arms exports. This strategy should face even closer scrutiny now, given the alleged murder of Washington Post columnist Jamal Khashoggi by the largest recipient of UK arms, the government of Saudi Arabia. [6]

Out of the estimated 142,000 people employed in the UK arms industry, only approximately 11,500 jobs are currently supported by Trident according to CND research. [7] The employment supported by replacing Trident meanwhile is estimated at between 26,000 and 30,000 with many of those jobs not appearing until after new submarines come into service in 2031.

Making a success of economic transition

Cancelling Trident’s replacement does not inherently mean putting this number of people out of work but there will be an impact on regions most heavily dependent on the programme. However, the money that could be saved by cancelling Trident replacement is vast, estimated at between £140bn and £205bn over its lifetime. Even if some pay-back on cancelled contracts is required, just a tiny fraction of what is left could easily cover the very modest costs of diversification programmes.

Nevertheless, even where diversification has been deemed to be a success, the costs of the reallocation of resources from military industry to civil production should not be understated. There is a real cost for workers and communities, especially where new economic activity cannot be created in the same location through an idealised plant-based conversion programme. Every international case study identified involved substantial job losses in the short term.

On the other hand, economic transition always results in upheaval, and 'do nothing' is not an option: trends in defence spending and markets show that employment in the arms manufacturing sector is already shrinking. Diversification should not be portrayed as a manifesto to save every job but a tool to mitigate the impacts of change and provide opportunities.

There is an entirely justifiable debate to be had over whether job losses in the arms industry deserve special attention, or state support, above and beyond that offered to other sectors. However, there are clear reasons to consider government funding for diversification.

First, disarmament should not lead to unemployment as this creates a perverse disincentive for peace-orientated activities and reductions in military expenditure. Second, incentives for the transfer of resources from the defence sector to civilian production are vital in order to develop a country’s industrial and technological base as well as to provide employment. This is especially relevant where arms industry workers have particularly valuable skills and knowledge that have been built up working on government contracts. These workers’ abilities can be thought of as a national asset that should not be squandered. Thirdly, the arms industry’s principal customer is the government, on whose behalf resources were committed to weapons manufacture. As such, there is arguably a societal obligation to help return them to commonality with their civilian counterparts. [8]

Furthermore, as military spending has become increasingly capital intensive it produces relatively few jobs. A University of Massachusetts study concluded that, if the US government invested $1 billion in alternative civilian sectors rather than on military production, it would generate up to 140% more jobs. [9] For example, investments in clean energy, health care and education create a much larger number of jobs across all pay ranges, including mid-range-paying jobs and high-paying jobs.

The possible transfer of skilled engineering talent from the arms industry into efforts to fight climate change is also tantalising, both because of some clear crossover in the skills needed and because of the obvious security benefits in fighting climate change. 208,000 people are already directly employed in the UK low carbon and renewables sector, nearly 50% more than in the arms industry. [10]

Proposals for conversion have already been made for each major location that would be affected by the cancellation of Trident – and many of these include a switch to green jobs.

Learning from workers and communities

The NET study assessed accounts of post-Cold War diversification programmes in Estonia, Germany and Italy, post-Apartheid South Africa’s efforts to convert its nuclear weapons factories, and an on-going programme in the USA for diversifying regions dependent on military contracts. Each of these programmes followed a different approach and had various levels of success but there were common factors which give lessons for future efforts.

The research showed that the best ideas and innovations nearly always come from the workers and affected communities – but on their own, these are not enough. A broad partnership is needed to tackle the issues and, for the best chance of success, the arms companies themselves, national and local government, trade unions, civil society, academia and other stakeholders must all fulfil their role in supporting workers and affected communities in making decisions for their future. This coalition must be given appropriate support in organising, analysis and planning as well as implementation. It was found that years of preparation are needed for a plan to be successful, so diversification planning should begin long before job cuts are expected. More detail on the lessons learned are given in Box 1.

Speaking at the parliamentary launch of the NET report, Fabian Hamilton MP, Shadow Minister for Peace and Disarmament, said "While it is not yet Labour Party policy to scrap Trident, I am committed, not only to transitioning away from nuclear weapons, but to protecting jobs at the same time. High-skilled jobs are good for our economy and, if we decide to transition away from Trident, defence diversification is the only way to ensure that the vital skills used in the development of Britain's nuclear weapons are not lost.

A defence diversification strategy would go hand in hand with Labour's plan to invest in our economy. We do not lack the talent, we simply lack the funding. There is no denying that Trident is a major employer in some parts of the country, so proper funding must be made available so those in high-skilled work, stay in high-skilled work."

Several trade unions, as well as Jeremy Corbyn, have already called for a publicly-funded Defence Diversification Agency to be set up that could provide coordination, assistance and finance to diversification efforts.

NET hopes that this research will inform political parties, trade unions and civil society on what action can be taken now to build coalitions and analyse local economies so that the UK can protect workers while taking the right decisions for our security.

Barnaby Pace is the author of Defence Diversification: International learning for Trident jobs, [2] a report from Nuclear Education Trust, an independent charity.

[3] O’Malley J (2016). The submarine drones that could depower Trident. http://www.alphr.com/the-future/1003587/the-submarine-drones-that-could-depower-trident

[6] SIPRI (2017). The state of major arms transfers in 8 graphics.  https://www.sipri.org/commentary/blog/2017/state-major-arms-transfers-8-graphics 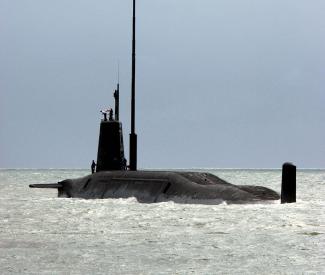