SGR believes that rapid system and behaviour change are needed to confront the climate emergency. Our work encourages responsible choices in technology, infrastructure, policy and behaviour to shift to ways of living and working that are compatible with meeting globally agreed climate targets.

Our current projects as part of our Responsible Science campaign include:

The Science Oath for Climate for scientists, engineers and academics to demonstrate their commitment to speaking out about the scale of the threat shown by the scientific evidence, and the consequent speed and scope of necessary action - despite the often politically challenging conclusions that they lead to. In order to show leadership, signatories pledge to take action to reduce their own emissions and to lobby their professional associations to align themselves to pathways compliant with the Paris 1.5°C pathway. The oath is about both individual behaviour and system change.

The Paris Climate Agreement - agreed in 2015 - recognises that net global carbon emissions must reduce to zero by mid-century to avoid dangerous climate heating. Regrettably, completely insufficient action has so far been taken by governments and industry, and carbon emissions have continued to rise inexorably. Indeed, some of the emissions reduction action that is planned is based on deployment of carbon reduction technologies and measures which fail to take into account physical or environmental limitations. A great deal of attention is given to unproven, high risk 'techno fixes' in the realm of geoengineering, for example, whilst unscientific and often practically flawed schemes to offset emissions are too often offered as a panacea and alternative to behaviour change. Leading climate scientists are now arguing for a more open and honest discussion of the extreme risks to the global climate and the need for transformative - if politically difficult - action.

The risk we face is that, unless emissions can be swiftly reduced to zero, [i] the global climate system will move into a dangerous ‘hothouse earth’ condition, hostile to life in many regions with huge sea level rises (eventually reaching over 6m), lethally hot and humid weather periods (with 'wet bulb' temperatures over 35C), extreme droughts and wildfires, intense storms, widespread flooding, extensive disruption of vital weather patterns such as monsoon rains, and catastrophic damage to natural ecosystems and human society. [ii]

Scientists for Global Responsibility, along with many other organisations, supports a transformation to a zero-carbon society and economy through major energy conservation measures, rapid expansion of renewable energy, and large-scale changes in areas such as food production, transport and industry. A shift to low consumption lifestyles in industrialised countries will be a key part of the transition.

In recovering from the Covid-19 pandemic, SGR supports the ‘Just Recovery’ and ‘Build Back Better’ campaigns which argue for prioritising health and public services, building resilience in society, and a 'Green New Deal' which transfers resources into environmental technologies and businesses. In particular, we support large-scale conversion of arms manufacture - especially nuclear weapons and other weapons of mass destruction - to peaceful uses.

SGR has produced a range of resources on these topics including slide presentations, articles, and reports for use in raising awareness and keeping up to date with the scientific evidence. For example:

Our other main outputs are listed in date order in this section.

[i] The Intergovernmental Panel on Climate Change (IPCC) advises that global carbon emissions should at least halve by 2030 relative to 2010 levels. If no action is taken, and global emissions continue to rise, humanity will 'lock in' dangerous levels of climate heating by 2030-2040. See, for example: Hagerdorn et al (2019). Concerns of young protesters are justified. Science. https://science.sciencemag.org/content/364/6436/139.2

[ii] Steffen et al (2018). Trajectories of the Earth System in the Anthropocene. Proceedings of the National Academy of Sciences, USA. https://www.pnas.org/content/115/33/8252 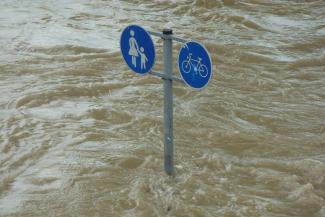