A range of expert authors provide novel and important analysis of controversial issues in science, design and technology.

1. Scientists for Global Responsibility (SGR) is an independent UK-based organisation of ethically concerned science, design and technology professionals. Founded in 1992, it has approximately 750 members. For more details, see /

2. Electronic copies of articles from SGR Newsletter no.45 are being released over a period of several months, with some publicly available now – see: /publications/sgr-newsletter-45

3. Printed copies of the newsletter are mailed to SGR members upon publication. Back issues of the SGR Newsletter are available to download. For more details, see: /publications/sgr-newsletters 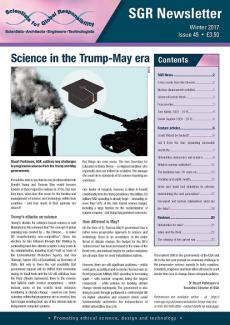