The international response to the coronavirus pandemic is not happening in a vacuum, but in the long shadow of unequal relationships between countries that have deep economic and political histories.

Nearly three decades ago in the early 1990s, sat at a desk in the anti-poverty charity Oxfam, I was writing a press release with the headline, ‘Slashed, Cut, Forgotten.’ It was part of a campaign against threatened cuts in the Budget to UK overseas aid which proved successful, but was playing out against the backdrop of an unjust rising debt crisis, unfair trade and human displacement due to multiple conflicts.

A target for wealthy countries to allocate 0.7% of gross national income to overseas aid was set by the UN General Assembly in 1970 (compare this to the target set by NATO in 2014 for member countries to spend a minimum of 2% of GDP on the military). Back in the early ‘90s momentum was gathering through a series of UN conferences following the UN Earth Summit of 1992 for a set of new development goals to mark the approaching millennium, these ‘millennium development goals’ (MDGs) later morphed into the current ‘sustainable development goals’, or ‘SDGs’. Behind all of them was the critical questioning of financing, and hence the important, though never straightforward question of aid spending. ‘Aid’ of course implies charity, when in fact this form of international redistribution might better be characterised as compensation for past and current injustices, engineered inequality and damage caused. The SDGs, which include health targets, always have and remain chronically underfunded. At the same time, both the climate emergency and the habitat destruction which increases 'zoonosis' - the spread of diseases from animals to humans - result significantly from the pressure of economic activity to supply high consumption levels in wealthy countries.

Following massive civil society mobilisation against poor country debts and global poverty more generally the UK began meeting the 0.7% aid target in 2013, and in 2015 its commitment to it was made legally binding. In 2019 the Conservative party reaffirmed its commitment to keeping that level of spending in its general election manifesto. So it surprised many when in the 2020 spending review, the UK Chancellor, Rishi Sunak, announced that he was reneging on his party’s legal and manifesto promises, triggering the resignation of a Foreign Office minister in protest.

The reality of these cuts emerged in early 2021 with aid to strife torn Yemen facing cuts of nearly half, and to Syria a cut of two thirds. South Sudan, Libya and Sudan also face major cuts.

Most global emergencies are what the international humanitarian community calls ‘complex’, often combining a mixture of conflict, economic and environmental instability, poverty and inequality. That could certainly be said of the countries facing sharp falls in UK aid. Not only do they suffer these and existing impacts from climate destabilisation, but with broken health services and displaced populations the conditions for the spread of coronavirus have worsened, and ‘exacerbated crises’ in the Middle East and Africa.

Sir Mark Lowcock, Under-Secretary-General at the Office for the Coordination of Humanitarian Affairs (OCHA), and former permanent secretary at the UK’s Department For International Development (DFID), criticised the UK’s decision as, “an act of medium and longer term self-harm, and all for saving what is actually – in the great scheme of things at the moment – a relatively small amount of money”. He added, “The decision, in other words, to balance the books on the backs of the starving people of Yemen, has consequences not just for Yemenis now, but for the world in the long term.” Lowcock previously also criticised Boris Johnson to the BBC for the UK’s, “Policy inconsistency and incoherence between on one hand raising issues like climate change in the Security Council, which is a good thing to do, and on the other hand cutting back the things the UK is doing to tackle those issues.”

A political posture not economic necessity

Worse, this government’s decision to cut aid is a purely political posture, and nothing to do with ‘straitened’ economic circumstances. That was untrue. Public spending or rather in this case, potential investment in collective, international human security, is not a zero sum game. Government can, more or less, spend what it wants to, and in this case obliged itself to do so by law. As Richard Murphy, tax justice campaigner and Visiting Professor of Accounting at Sheffield University Management School explains, “Whenever the government wants to spend it can. Unlike all the rest of us it doesn’t have to check whether there is money in the bank first. It knows that legally its own Bank of England must pay when told to do so. It cannot refuse. The law says so.”

All this sets the scene for the current, self-defeating mismanagement of the pandemic response. A wave of almost existential relief met the initial roll-out of Covid-19 vaccines. For pharmaceutical companies, historically embroiled in a wide range of ethical and legal controversies, it must have felt like one of their finest moments. To judge by certain media coverage, it was understood as a pure, private sector victory. In a discussion about the failures of health outsourcing, on the flagship BBC Radio 4 Today Programme (08/02/21) it was put to the official opposition’s Shadow Chancellor, the Labour Party’s Rachel Reeves, that ‘ownership’ did not matter, because the vaccines were made by private companies. There was no mention, of course, that most scientists working for pharmaceutical companies would have been trained at publicly funded universities, that the companies made lucrative profits from public procurement contracts, or that repeated examples of drugs companies overcharging the NHS come to light.

Pfizer, praised for its vaccine work, for example was fined £84million by the Competition and Markets Authority (CMA) in 2016, one result of multiple such investigations.  Another case the following year against Concordia highlighted £34 million of overcharging.

Pfizer escaped the fine on appeal, but left with the Appeal Court commenting on the “stark reality” that “literally overnight, Pfizer and Flynn (another pharmaceutical company in the case) increased their prices… by factors of between approximately 7 and 27, when they were in a dominant position in each of their markets.” Critically, the CMA said as recently as March 2020, as the pandemic worsened, that it “continues to have serious concerns about the very big price increases imposed by certain drugs companies for several other generic drugs, which have cost the NHS hundreds of millions of pounds. The CMA remains committed to its work to robustly tackle any illegal behaviour by drug companies ripping off the NHS.”

Snatching defeat from the jaws of vaccine victory

But an even larger, long-standing global issue overshadows recent particular triumphs with the Covid-19 vaccine. It is a structural problem of global health that shows the degree to which private research interests, driven by the profit motive, distorts and undermines the care and treatment of the global majority.

As the British Medical Journal (BMJ) explained in a 2006 editorial, headlined, ‘The Great Medicines Scandal’, “The failure of pharmaceutical companies to invest in research and development of medicines for neglected diseases is long standing.” Looking at new drugs developed over a thirty year period, it said that only 21 of 1556 were targeted at priority health threats in poorer countries such as malaria, tuberculosis, leishmaniasis and other key conditions. “Sick people in poor countries are deeply disadvantaged,” said the BMJ, “The millions who have “neglected” tropical diseases lack safe and effective drugs. Those afflicted with “Western” diseases… can ill afford treatment.” ‘Western’ diseases usually refers to a range of illnesses, such as breast, prostate and colon cancers, and coronary heart disease.

Now, in the middle of the biggest global health crisis in living memory, the Global South is again being failed. Lack of access to essential treatments for Covid-19 mirrors the historic marginalisation of health services for poorer countries (not to mention worse health outcomes for poorer people in richer countries also being the norm).

According to the People’s Vaccine Alliance, a campaign group including Amnesty International, Frontline AIDS, Global Justice Now, and Oxfam, nine out of ten people in 67 low income countries are highly unlikely to be vaccinated against Covid-19 during the whole of 2021. The reasons, according to the Alliance, are down to rich countries hoarding vaccines and drug developers being unwilling to share their intellectual property.

Rich countries representing only around one in seven of the world’s population bought over half of the eight most promising vaccines. As of December 2020, the BMJ reported that ‘AstraZeneca-Oxford, Moderna, and Pfizer-BioNTech had received more than $5bn (£3.79bn; €4.13bn) of public funding in developing their vaccines.’ Campaigners for the Alliance called on the manufacturers to support the World Health Organization’s (WHO) Covid-19 technology access pool and share their intellectual property.

The head of the WHO, Tedros Adhanom Ghebreyesus, warned in January 2021 of the world being on the edge of a “catastrophic moral failure” as, at that point, only 25 individual doses of vaccine had been administered across all poorer countries, compared to 39 million doses given in rich countries.

In June 2020, at the Global Vaccine Summit, Gavi, a global alliance to provide access to vaccines to poor countries, underpinned by the WHO, UNICEF, the World Bank and foundations, launched the COVID-19 Vaccines Advance Market Commitment as the first step of creating the COVAX Facility. Its aim was to ‘make sure the most vulnerable in all countries can be protected in the short term, regardless of income level.’ But, judging by the conclusion of the WHO itself, it had failed to do so by early 2021.

One problem was that several wealthy countries hugely over-ordered vaccines. The US ordered double the amount needed for their whole population, the EU 2.7 times its population, the UK 3.6 times and Canada 5 times their respective populations. In an initiative that appeared like medical crumbs from the lavishly laid table of the wealthy, a February 2021 G7 meeting saw the proposal that ‘surplus’ vaccines’ held by rich nations would be distributed to poorer countries. However, it was reported that the, ‘decisions on when and how much of the surplus will be distributed will be made later,‘ in the year.

Given what is known about the speed of virus transmission, and how quickly the virus is evolving, the attitude of rich nations appears still to be lethally complacent and counterproductive. If they do not wake up to the need for genuine, timely, support and cooperation at the scale needed to prevent uncontrolled suffering, something even worse could soon haunt the global community that none can hide from.

(Photo by Edwin Hooper on Unsplash) 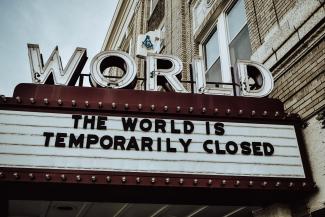