In a conversation recorded before the Covid-19 crisis hit, which is raising many questions about the responsible use by policy makers of scientific advice, SGR’s Andrew Simms interviews the leading voice on climate science, Prof Kevin Anderson of the Universities of Manchester and Uppsala, about the responsibilities of scientists in the climate emergency. He is outspoken in saying that the scientific community has much to do to change its ways.

Andrew Simms: Would you like to hear more from your fellow climate scientists now about the speed and scale of action required?

Prof Kevin Anderson:  I’d like to hear much more of what many academics say in private being said in public. This is also true of many others I engage with across the climate change community – from those in NGOs to more informed policy makers, business types, journalists, and more. Over the past two or more decades I’ve witnessed an emerging preference for spinning an appealing but increasingly misleading yarn about what is needed to meet our various climate commitments. Disturbingly, many of those who should know better have even begun to believe their own delusionary tales. The enthusiastic and almost unquestioning support by many academics for the Climate Change Committee’s (CCC UK) ‘net zero’ report, or ‘not zero’ as I prefer to call it, exemplifies how we’re prepared to forgo analysis and integrity to maintain politically-palatable fairy-tales of delivering on Paris.,

AS: And what are they saying in private?

KA: Not all, but many had been telling me for years that there’s no hope of staying below 2 degrees centigrade, that we’re heading to three or four degrees. I should add that I disagreed with this view, arguing that if we’re lucky on climate sensitivity and are prepared to grasp the nettle and make very difficult but doable cuts in emissions, then a thin thread of hope remained for staying below two degrees. Today, the chances are much, much slimmer and with the cuts in emissions completely unprecedented and far beyond anything in the public and political debate. What I find most disturbing, is that many of those who previously had told me, away from any microphones, that 2°C was not viable, are now coming out in support of meeting 1.5°C. Worse still, they repeatedly point to idealised technical solutions, yet often with little understanding of either the technologies or their practical delivery, let alone the timelines for making wholesale shifts in technologies and associated infrastructures.

Typically it is more senior academics and others who hold these conflicting public and private positions. Whilst such deception is often very well meant, it nevertheless reflects a deep arrogance. They are basically saying, I’m a sufficiently clever person, that I can judge what is politically or not viable, and therefore by massaging my assumptions I can provide politically appropriate conclusions. Such arrogance is widespread. Just look at the CCC UK. I have a huge respect for the CCC’s secretariat, and particularly the new CEO, Chris Stark, I think he’s excellent. But since its inception, the academic Commissioners who, in many respects guide the framing of the secretariat’s work, have failed to support the CCC in pursuing genuinely independent analysis.

As such the CCC have, in my view, misled parliament and the public – at least in terms of mitigation. Individually I respect the academic work of many of the commissioners, some of whom I know well and would call friends, but as soon as they don their CCC hat, academic rigour is weakened in favour of political expediency. Exacerbating all of this is repeated reference to the CCC as independent. It is not. It is basically a Quango with advisors and a secretariat more sensitive to the dominant political and economic dogma than to the implications of their science.

As I say, all this is done with good intention – and perhaps if the rest of the academic community held the CCC, and government ministers, to account, this would not be a problem. But by and large the academic community, including the funders, have abdicated this responsibility preferring to embrace the CCC as the climate oracle. I want to add here, that I have spoken to Chris Stark about this, and think it only fair to note that he strongly disagrees with my views on how the Commissioners have engaged with the secretariat – seeing their contribution in a much more constructive light.

AS: Does that mean that in effect, they’ve been self-editing, or self-censoring, in terms of not saying what is necessary to align the process of economic and political change to meet the Paris targets?

KA:  I think that’s true of the CCC, and I think it’s true of a high proportion of academic work on mitigation, particularly at a senior level. Unfortunately, this invidious political expediency percolates down to some of the earlier career researchers. However, from experience, the Post Docs and the PhDs demonstrate much greater integrity with their research, and an honest recognition of the scale of the challenge we face.

I’ve only really become aware of the misleading and dangerous influence of some senior academics on their earlier career colleagues over the past two years. It was brought to my attention at one of the big climate negotiations, (COPs) I was attending. Chatting to those without grey hair, it became increasingly clear many of them were being reprimanded for asking difficult questions by their senior colleagues and supervisors. I really found this hard to believe. But the more I asked about this the more I realised I’d been living in a naïve bubble unaware of how vibrant academic debate driven by younger academic colleagues is being deliberately stifled. And this is not something that only others elsewhere are doing. I now hear that senior colleagues I’ve worked with & known for years – sharing many a vibrant exchange over coffee or a beer with some of them - have also actively constrained the contributions of ‘their’ earlier career colleagues.

I assumed most good academics thrived on open debate and courteous but robust disagreement – Ok, put on a CCC hat, do some consultancy work etc, and there’s a risk of all too easily being co-opted. But this is much worse. It’s a deep institutional systemic bias towards aligning our conclusions within the boundaries of the status quo – and this extends to the funders. We’ve chosen to forgo our academic independence for the appeal of being relevant within a debate our own analysis tells us is irrelevant.

It’s only then when a Swedish child has the courage to call out our nakedness, echoed by a similar call from our own children, that we stir from our cosy consensus. Forced to look in the mirror – it’s becoming bloody obvious that we’re naked and have been for a long time, but no one has had the guts to tell us. The wonderful thing about children is that they’re not yet locked into our political baggage – but if they go on to become post-docs, we’ll do our best to bash them into conformity.

AS: Do you think it would have been easier to bring forward political and policy proposals that were in line with the scale of the problem if the scientific community had censored what they had said less?

KA: Well, first of all, I don’t think the scientific community should censor what it says at all. If it does censor, then it isn’t the scientific community. There’s a serious risk that we’ve become little more than a group of elite privileged citizens. With no expertise in processes of change in emergencies, or political economy more generally, we pontificate on responding to climate change, hiding the ignorance underpinning our expedient suggestions behind a veil of academic objectivity.

I take a straightforward view of our role as academics. We need to develop a culture of being  disinterested in whether people like or dislike our work, our only interest should be in whether people agree or disagree with our analysis and conclusions – and why. Academia should not be a fashion contest, or a desperate clamour for funding, committee memberships, gongs, awards and prestige.

As for whether honesty, integrity and robust bluntness would have significantly changed where we are now, - well in my judgement, yes and significantly so. I can understand the levels of measured optimism of the early 1990s; that substantial but nonetheless incremental changes to business as usual could have led to a timely decarbonised future. But by 2000 it was becoming obvious that such optimism was now misplaced. Rising emissions & more locked-in fossil fuel infrastructure and associated expectations, had kicked the potential of incrementalism into the long grass. During the subsequent two decades, the academic and climate change community has not played a straight bat when it comes to mitigation. As the years have passed, through 2005, 2010, and onto 2015 and Paris, we've adopted increasingly exotic technologies, technocratic fraud, dodgy accounting and eloquent nonsense as a salve for ever-rising emissions. There is no group that can be singled out for this abject failure. Certainly the academic community learnt credibility to the fluff and nonsense that has filled the void left by failing to mitigate. But the journalists have played their role – more spin and glossy stories than investigative reporting. The policy makers, the business community, the unions, civil service and the electorate, at least in democracies, don’t come out of this any better. And nor do the climate great and good – from Gore to DiCaprio, Attenborough to Goodall, Musk to Branson – all have been party to a greening of business as usual. On mitigation and particularly cutting emissions in line with Paris, we’re all players in a grand unifying delusion – we’ve become mitigation-deniers.

If, on mitigation (as distinct from the science), academics had collectively favoured meticulous analysis, system thinking and blunt communication over spin & well-intentioned sycophancy, then I think we could have catalysed a different and more honest debate. Whether this would have led to the profound changes to contemporary society now required by Paris cannot be known. But rigorous academic input was and still is a prerequisite of transforming the thinking, expectations, policies, and societal norms inline with 2°C carbon budgets. Of course, such input is not sufficient, but without it we will continue to fail.

Biography: Prof Kevin Anderson holds a joint chair between the School of Engineering at the University of Manchester and the Centre for Environment and Development Studies (CEMUS) at Uppsala University. He recently completed two years as the Zennström professor of climate change leadership at Uppsala and previously held the role of director of the Tyndall Centre for Climate Change Research. Kevin is research active with publications in Science, Nature and Nature Geosciences.

Kevin engages widely across all tiers of government (EU, UK and Sweden) on issues ranging from shale gas, aviation and shipping to the role of climate modeling (IAMs), carbon budgets and ‘negative emission technologies’. With Uppsala colleagues, Kevin has made a key contribution to the development of Paris-compliant carbon budgets for Swedish Län and Kommuner, and with Manchester colleagues, his analysis contributed to the framing of the UK’s Climate Change Act and the development of national carbon budgets. Kevin has a decade of industrial experience, principally in the petrochemical industry. He is a chartered engineer and a fellow of the Institution of Mechanical Engineers. 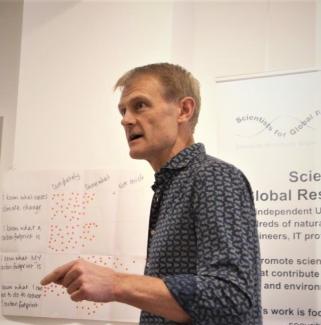