Back in 2008, a scientific task force of the US Department of Defense published a report entitled ‘More Fight, Less Fuel’. [1] It highlighted how the military was a huge consumer of fossil fuels, and how this made it vulnerable. The report argued that a focus on improving fuel efficiency, and greater use of renewable energy and battery technology, could give the US significant advantages on the battlefield. Almost in passing, it also mentioned that this approach could help reduce greenhouse gas emissions and reduce the military’s contribution to climate change.

Now, over ten years later, this approach seems to be at the centre of a new-found interest of the military to play its part in tackling climate change. It can be seen within both the new NATO Action Plan on Climate Change and Security – published yesterday – and in the UK Ministry of Defence’s Climate and Sustainability Strategic Approach – published in April. The danger with such an approach is that it threatens to co-opt the climate agenda into the current military power struggles.

Let’s look first at the latest NATO statements. The Action Plan [2] begins by stating that “Climate change is one of the defining challenges of our times. It is a threat multiplier that impacts Allied security, both in the Euro-Atlantic area and in the Alliance’s broader neighbourhood.” Hence NATO will “adapt its capabilities to the changing climate”. It will also develop a “mapping and analytical methodology” which “could contribute to formulating voluntary goals to reduce greenhouse gas emissions from the military”. The NATO Communique [3] – issued at the same time as the Action Plan – goes on to say “We agree to significantly reduce greenhouse gas emissions from military activities and installations without impairing personnel safety, operational effectiveness and our deterrence and defence posture”. Furthermore, “We invite the Secretary General to formulate a realistic, ambitious and concrete target for the reduction of greenhouse gas emissions by the NATO political and military structures and facilities and assess the feasibility of reaching net zero emissions by 2050.”

The UK strategic approach has many similarities – but is significantly longer and includes some more specifics. [4] In particular, it says the military will “contribut[e] to the achievement of the UK legal commitment to reach net zero emissions by 2050”. It also says that climate change will mean the military has “to fight and win in ever more hostile and unforgiving physical environments” and hence “Defence will seek to use the green transition to add to capabilities”. For example, “New energy systems could offer the operational edge against adversaries”. It then adds that the military will “never compromise[e] capability solely for a sustainable solution”. The document maps out a broad approach to reducing emissions over the next 30 years.

There are numerous implications following from these documents, but the key ones are as follows.

Firstly, the documents are very weak in their commitments to shrink military greenhouse gas emissions. No clear reduction targets have yet been announced – although it seems these are in the pipeline – and, in any case, all action is conditional on maintaining or preferably improving ‘operational effectiveness’. Hence, to meet the Paris climate goals, civilian sectors will need to take increased action to make up for the lack of ambition of the military.

Closer examination of the UK situation is particularly revealing in this regard. The strategy document highlights a large decrease in military greenhouse gas emissions over the last decade. However, it fails to acknowledge that these reductions have been achieved mainly through a combination of: increased renewable energy feeding into the national electricity grid (and used by military bases); reduced overseas military operations; and military base closures as part of austerity policies after the global financial crisis. [5] Very little of this reduction has been achieved through military action to reduce emissions – and, indeed, some is easily reversed. So, as military spending has started to increase again, we have seen a 24% increase in military greenhouse gas emissions since 2017 [6] – not least because of the commissioning and deployment of two huge new Queen Elizabeth class aircraft carriers, fuelled by fossil fuels. It is clear that the link between high military spending, high operational intensity, and high greenhouse gas emissions is not being broken.

Secondly, there is the issue of which non-fossil fuel energy sources will be expanded for military use. Nuclear power has been used for decades for submarines – but any expansion will increase the impacts of radioactive contamination, including into war zones. Meanwhile, the UK has already modified its aviation fuel standards to allow some use of liquid biofuels. [7] But biofuels are also highly controversial, not least because of the competition between land for energy crops and land for food. Military use could significantly increase this competition – with the world’s poorest being the victims.

Thirdly, there is no acknowledgement within these strategies of the greenhouse gas emissions released by the effects of war itself – for example, through the bombing of fossil fuel depots or the destruction of forests, or due to post-war reconstruction, especially if it involves re-building carbon-intensive concrete buildings. These could be very large, as new analysis from the Conflict and Environment Observatory (CEOBS) has noted. [8]

The fourth concern is arguably the most serious. This is the danger that a low carbon transition within militaries threatens to speed up the current arms races among the world’s major military power blocs – especially between NATO, China and Russia. So, far from reducing emissions, it would lead to more competition, more confrontation, and more risk of conflict – and lead to higher military spending and ultimately more greenhouse gas emissions. A particular concern here is the increasing military use of robotic technologies and artificial intelligence. Robotic aircraft, for example, tend to be lighter and more fuel efficient. Hence, they can be used to fly further or carry more weapons. There is a widespread concern in civilian sectors that increased energy efficiency often does not lead to reduced fuel use (and therefore reduced greenhouse gas emissions) – because, without other restrictions, the technology is simply used more. The effect is called ‘rebound’. There is a very real risk that greater military energy efficiency will also lead to rebound – indeed, this seems to be the intention: ‘More fight, less fuel’.

Finally, there is ‘elephant in the room’ – the climate impact should nuclear weapons ever be used again. The threat of a ‘nuclear winter’ – a rapid catastrophic cooling of the climate due to the huge amount of smoke that would be injected into the upper atmosphere from a nuclear war – was first recognised by climate scientists in the 1980s. Over the past 15 years, this research has been updated using the latest climate models, and it shows that if anything the climate is even more sensitive to these effects. [9] No military can claim to be ‘climate friendly’ while it deploys nuclear weapons.

The policies that are missing from the NATO and UK military climate strategies are policies to directly promote peace – including diplomacy, and arms control and disarmament treaties. Renewed pursuit of nuclear disarmament, for example, which has already begun through the extension of the New START treaty between the USA and Russia, could be expanded through the new Treaty on the Prohibition of Nuclear Weapons. This could save a lot of the greenhouse gas emissions from the current ‘modernisation’ programmes of the nuclear-armed states – as well as reducing the threat of nuclear war. Likewise, a new treaty banning lethal autonomous weapons could stop the growing arms race in these technologies – and hence the associated greenhouse gas emissions.

The NATO spending target of 2% of GDP on its militaries is particularly problematic. NATO is already responsible for 55% of global military spending – more than three times the combined spending of China and Russia. [10] Even some supporters of NATO strongly criticise the goal. [11] The target is currently driving a major increase in military spending – just at a time when we need more spending to tackle the climate crisis, recover from COVID-19, and tackle poverty and inequality. Such a target is also likely to increase military greenhouse gas emissions, as the early evidence above from the UK shows.

More broadly, we need a strong emphasis on supporting ‘human security’ – as championed by the United Nations – rather than a preoccupation with ‘national security’. We have seen this most acutely over the past year during the COVID-19 pandemic. Nations which had spent on robust healthcare systems – and hence had low health inequality – coupled with focused spending on pandemic preparedness, dealt much better with the problems that those which had not. It was striking that many NATO countries with high military spending, such as the USA and UK, were found to be ill-prepared – and experienced huge death tolls. The climate crisis threatens to repeat these problems on an even larger scale.

Organisations are invited to join the following call:

Dr Stuart Parkinson is Executive Director of Scientists for Global Responsibility (SGR). He is author of numerous reports and articles on the military and climate change. 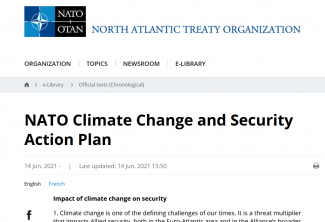