Dr Alan Cottey gives a brief account of Martin Ryle's intense and complex relations with war and peace. This article is part of the marking of the centenary of Sir Martin Ryle (1918 – 1984). It complements an earlier one on Ryle and energy. [1]  Martin Ryle is best known for his pioneering contributions to the techniques and use of radio astronomy. For this he is justly celebrated and was chosen as one of ten eminent Britons in a set of Royal Mail stamps.

In spite of recognition for his work on radio astronomy, “Ryle would have wished to be remembered also (perhaps, in his later years, remembered above all) as a deeply committed scientist who spoke out clearly and passionately concerning the urgent need to direct science for the good of mankind and away from those developments that increasingly threaten the world.” This assessment comes at the end of the Royal Society’s Biographical Memoir of Ryle, by Sir Francis Graham-Smith [2] and has been echoed by many others. This memoir and the Ryle Papers [3] are the principal sources about Ryle.

Martin Ryle had an idealistic but also fiery disposition. I believe that understanding his character, as far as it is possible, is valuable for all who address the current social and technological problems of the world, and is especially valuable for scientists. He was born into a distinguished intellectual family. After Martin’s death his elder brother, John Creagh Ryle, wrote “With a very idealistic father, and a mother of deep Celtic emotions, and no religion, he had to feel strongly about some cause.” [4] While a sibling’s testimony might often lack objectivity, this comment does match what is known from others and from Martin’s writings.

Ryle detested war but he detested injustice and Fascism more. He was also patriotic. When World War II started in 1939, he had special skills. He had been a talented radio ham since youth and he possessed a first class degree in physics. He was soon directed to what became the Telecommunications Research Establishment (TRE). He threw himself into this with an intensity unusual even for the total mobilisation of the time. At this time he developed many skills which served him well for the rest of his life - speed of thought and decision, drive and charm. His volatility was also noted. A secretary reports that she was asked to take a paper to him. She paused at the door. Someone went by and said “It’s safe, he’s in a fairly good mood today.” [5]

At age 23 Ryle became leader of Group 5, attempting to reduce Bomber Command losses. Though not at the front, Ryle was intimately involved with the air war, including the air-crews who suffered, but also meted out, horrific affliction. Of course, such has always been the nature of war, but Ryle was much more sensitive and conscientious than most and he was deeply affected for the rest of his life.

Ryle often said, and it is much repeated, that he turned to astronomy after the war as this seemed as far as possible from military science. Yet he got a fast start with a large amount of high quality requisitioned German radar equipment. No doubt this seemed more logical than ominous.

It is less well known that Ryle continued to have friendly research relations with military scientists until 1953, when he ended his association with the Science Advisory Committee (SAC) of the Ministry of Supply.

Ryle’s phenomenal career in radio astronomy is described in Francis Graham-Smith’s Biographical Memoir [2] and here I will simply mention two aspects that relate to war and peace. The first is that in the early 1960s Ryle protested against the ‘rainbow bomb’ nuclear explosions high above the Earth’s atmosphere. These protests were however much different from his later fervent warnings about the nuclear arms race, for he was joining with other radio astronomers in a concerted effort to prevent the disturbance of the Van Allen radiation belts and thence of radio astronomical observations.

The other aspect of Ryle’s radio astronomy period, which is much noted but not usually connected with war and peace, is that he was tribal. He won the highest loyalty, respect and affection, love indeed, from friends and from his team but was aggressive to some outsiders. [6]

The 70s were a decade of change for many. There was an increasing public awareness of the extraordinary state of nuclear weapon arsenals and policies - what Ryle, a few years later, in his most influential anti-nuclear publication, [7] called “this incredible situation”. Martin’s health, compromised since his early years, declined markedly. He phased out his engagement with radio astronomy but, despite his poor health, started a wind energy research group. It seems not to be known how and over what period Ryle recognised clearly that the heavens offered him no escape from the social and political problems of the world. Already a famous public intellectual, he entered the polemical fray in 1976 with a wide-ranging criticism of nuclear energy in The Times. [8]

In the few remaining years of his life Ryle extended the front, passionately protesting against the current state of the Cold War - the grotesque nuclear arsenals, the new missiles of the time and the hair-trigger strategies. The support of this prestigious scientist was greatly appreciated by other activists, who were often ignored or dismissed. In his last few years he protested also about the misuse of science and technology for destructive ends. Almost palpably, his words express the pain and despair he felt at the state of the world. He tried a shock tactic by speaking of a bumper sticker 'Stop Science Now'. [9] But his true feelings about science and technology are transmitted more accurately by “It is scandalous that a third of the world’s population does not have safe drinking water … these are problems which are soluble, but we don’t solve them.” [10]  33 years after Ryle said this, ‘a third’ had improved to 29%. [11]

In a 1982 letter [12] to long-standing friends who had evidently chided him about anger, Ryle ended “I believe one must do what one can with the imperfect person one is, in the time one has.”

Dr Alan Cottey is a trustee of the Martin Ryle Trust and a Fellow in the School of Chemistry, University of East Anglia.

1. Cottey A (2018). A man ahead of his time – how Martin Ryle saw the future of energy. /resources/man-ahead-his-time-how-martin-ryle-saw-future-energy 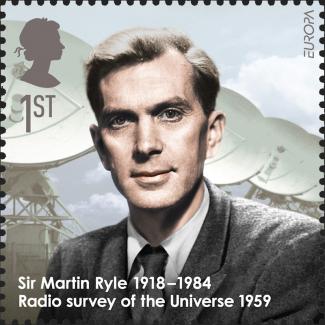