SGR members gathered for the organisation’s 20th anniversary AGM and strategy forum in London in May. Over 30 people attended, including long-standing members (some of whom had first been active with either Scientists Against Nuclear Arms or Architects and Engineers for Social Responsibility) as well as recent joiners.

SGR sponsor and host Edward Cullinan welcomed members to the event, with impassioned words arguing that the science, design and technology professions need to put much more focus on wider social and environmental concerns, rather than just financial priorities.

SGR Chair Philip Webber opened the formal proceedings of the AGM pointing to the achievement of SGR reaching its 20th birthday. Matters arising from the minutes of the previous AGM included a short discussion on the carbon emissions of the military and possible future SGR work in that area.

Executive Director Stuart Parkinson then presented the annual reports for 2010-111 and 2011-12. Focusing on 2011-12 activities, Stuart highlighted how SGR had continued to be influential and active on science, design and technology issues. A particular focus had been on linking the peace, environment and economic reform agendas and promoting diversion of military spending to energy conservation and renewable energy. Thanks to funding from the Network for Social Change, SGR had begun a new project critically examining the government’s spending on military and security R&D programme, with a view to promoting radical reform (see below). This built on SGR’s previous reports in this field, which themselves continued to be popular with thousands of downloads from the website. Other activity during the year included a conference on emerging technologies, 10 external lectures on issues such as arms conversion and climate change, numerous opinion articles and other appearances in the media, and campaign activities especially focused on energy issues. The organisation published the 40th issue of the respected SGR Newsletter, and the website continued to be well visited. Stuart also reported that the latest three-year development plan – funded by the Joseph Rowntree Charitable Trust – had come to an end during the reporting period. SGR had achieved much during the plan, including an expansion of the membership and high levels of activity.

Treasurer Alasdair Beal then reported on the SGR accounts. Finances continued to be tight, not least because of wider economic problems.

Researcher Barnaby Pace then discussed SGR’s new research and advocacy project in more depth. He reported that he had had some notable successes in obtaining new and detailed data on the R&D spending of the Ministry of Defence – via freedom of information requests – and had begun analysing it. He expected more data soon. Discussion followed about the potential implications of the research so far, including the degree of emphasis on ‘offensive’ military technologies versus ‘defensive’ technologies, and the benefits that could be achieved by more research focus on tackling the roots of conflict, including the growing competition over natural resources.

The meeting then moved to the election of this year’s National Co-ordinating Committee. The following candidates were unanimously elected.

Retiring members Roy Butterfield and Genevieve Jones were thanked for all their work for SGR over the years.

Stuart Parkinson then gave an update on recent activities, including an SGR presentation at a side event at the nuclear non-proliferation treaty negotiations in Vienna, and evolving plans for the SGR office to move to Lancaster in coming months.

The formal business was concluded with a vote of thanks to Kate Maloney, SGR’s Office Manager, who will be retiring this year having been with the organisation from its beginning.

The second part of the meeting was a strategy development forum led by occupational psychologist and SGR member Jan Maskell. Jan began by explaining that her approach to organisational development was based on identifying the positive aspects of organisations and individuals within those organisations. She then led the group through three exercises.

The first was a discussion in small groups of SGR’s key successes during the last 20 years. Members identified a range of activities including events (such as past SGR conferences), project work (such as the SGR report, Soldiers in the Laboratory) and high-profile media coverage (such as contributing to a front-page article in The Independent on opposition to UK nuclear weapons).

The second exercise – in the same small groups – gave members an opportunity to identify their skills and the activities they enjoy the most. This led into the final exercise where members were asked to come up with ideas for future SGR activities and commitments that they personally were willing to make – based on their skills. This led to offers of voluntary help, including fundraising, writing articles, and commenting on drafts of the new SGR report, for which we are grateful.

Stuart Parkinson closed the meeting with thanks to all involved.

1Only a summary of 2010-11 report had been available at the previous AGM, so it needed to be formally approved at this event. 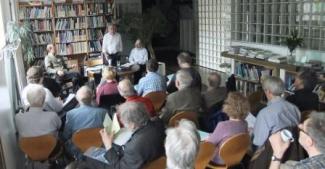