Skip to main content
Islam and the West: a personal perspective

Entitled Islam and the West: a personal perspective, Sir Michael's talk was sweeping and ambitious, yet retained at its heart a straightforward message: that diversity in culture and faith reflects the natural diversity of humanity, and that society is bettered when its people are educated to understand this and make connections, rather than to resist it and make divisions.

The subject of Michael Atiyah's lecture was the ebb and flow of conflicts and collaborations between Christendom and the Islamic world in the Mediterranean region from the 16th century (when Elizabeth I was on the English throne) to the present day — a dramatic period of history spanning half a millennium and, significantly, preceded some 300 years prior by the massacre of Muslims and Jews in Jerusalem during the Crusades.

If the scope of the talk was ambitious, the task of coaxing a distinct thread out of it in the 45 minutes allocated was perhaps even more so. Yet, despite technical hitches with the slide presentation, Atiyah deftly delivered on both fronts by means of a wide-ranging series of vignettes through time, illustrated with carefully selected slides, incisive observations, an occasional flash of irreverence and a uniquely personal touch.

Atiyah is the son of a Lebanese father and a Scottish mother and grew up in Egypt and Sudan. His early years — and a fascinating family history — at the intersection of Islamic and Christian communities informed the central theme of his lecture.

He began with snapshots of the Mediterranean region in the 16th century. A map from the time showed the Holy Roman and Ottoman empires to the north and North Africa to the south, dominated by Islam; while a drawing of the Corsair fleet, also known as the Barbary pirates (which were hardly lone wolves, Atiyah reminded, but rather a substantial naval force to be reckoned with) illustrated the ongoing battle for power, territory and resources.

The main issue always, he pointed out, was the balance of power between Islam and the West. The strategies deployed by both sides to gain an advantage were war, trade, religion and oppression. Trade was the lifeblood of the economy; it continued throughout and in spite of conflict. Slaves were the foundation of the economy and part of the booty of war. All were interlinked, and official accounts didn't always reflect the true picture. A key tactic on both sides was secret surveillance: double crossing and subterfuge were routine.

"If you see any analogies between that time and the present, you'll have got the message," he said.

Cross-cultural links, whether official or underground, were as critical to politics as to everyday life. Those places that were geographically and culturally well positioned to enable these links often accrued power and wealth — an example at the time being Albania, an Islamic country with close ties to Venice, from where the caliph recruited many of his chief ministers.

The theme of bridging and connecting prevailed as Sir Michael took a diversion into a slice of his family history. The Atiyah family, he explained, are Christians, of the early Greek orthodox variety, which dates back to 300 AD. His great grandfather Yusef was converted to Presbyterianism by US missionaries, who were at the time contributing to efforts by Western powers to influence events in the Ottoman empire.

For this transgression, Yusef's father kicked him out of the house, after which Yusef became a minister and religious scholar. He wrote texts aimed at showing Muslims the "superiority of the Christian faith" — but he wrote them in Arabic, reaching out in a welcoming and gentle manner to the Muslim community and acknowledging stories shared by both faiths. Research has since revealed this to be the first non-confrontational official engagement between the Christian West and the Islamic world since the Crusades. Unsurprisingly, Yusef is celebrated as a great figure in the Atiyah family.

Atiyah provided further insights into his cross-cultural upbringing, including sight of an early photograph of his family at their ancestral home in Lebanon and descriptions of subsequent spells in Egypt (where he was schooled in British colonial tradition at Victoria College, Alexandria, "the Eton of the Middle East") and Khartoum, where members of his family enjoyed senior positions within the British administration.

While acknowledging the privilege afforded by this background, Atiyah's observations demonstrated great sensitivity to the suffering and destruction wrought by the British in their determination to expand. He showed slides of Alexandria in 1880 and 1882, before and after its obliteration thanks to British naval bombardment, and made reference to the famous 1898 battle of Omdurman on the outskirts of Khartoum, in which thousands of Sudanese were killed by British forces at the hands of Kitchener (who subsequently brought in a flux of Arabic-speaking Christian Lebanese, including the Atiyah family, to help run that part of the empire).

He also showed slides of the Place of Martyrs in Beirut, comparing its architectural beauty in the late 19th century with the devastation following Israeli bombardment in 1982 in what the Israelis called "Operation Peace in Galilee" — a blatantly Orwellian use of the word peace, he acknowledged.

Moving forward to later years, Atiyah zoomed in on key moments of cross-cultural collaboration that transcended, preceded or followed hostility or betrayal, showing a picture of UK Prime Minister Anthony Eden and Egypt's President Nasser in 1955, whose apparent friendship was later to sour dramatically, and another of General de Gaulle talking to the Druze princess and singer Emira Amal al-Atrash, who had been a British agent in Syria before transferring her loyalties to France. She was killed in a car crash in 1944. "No doubt," said Atiyah, "not accidental."

Michael Atiyah's remarks on the symbolism of the Green Line in Beirut were extremely poignant. As recently as 1990 this separated Muslim and Christian communities in the city, representing both a frontier and the psycho-cultural divide that still today drives civilisations to destroy each other.

He closed by drawing the audience's thoughts back to an earlier time: 1492, a momentous year, for not only was it the year in which Christopher Columbus first set foot in America, but also the year in which the last of the Moors were expelled from Granada, concluding the exodus and annihilation of Muslims from Spain, and in which Islamic forces over-ran the Christian capital of Constantinople at the other end of the Mediterranean. The reminder reaffirmed the see-sawing, repetitive nature of the struggle for power and territory through the centuries in that region, and accentuated the call for greater attention to the benefits of cross cultural links, and to the importance of learning lessons from history.

The lecture was introduced and chaired by Dr Phil Webber, chair of the Martin Ryle Trust and author of numerous books and reports on nuclear weapons. Dr Webber provided the background to Martin Ryle, to the charity founded in his name, to Scientists for Global Responsibility and its forerunners Scientists Against Nuclear Arms (SANA) and the British Society for Social Responsibility in Science (BSSRS) and of course to Sir Michael Atiyah himself, who as well as being an eminent and much-decorated scholar of mathematics has also spoken out on matters of peace, specifically against nuclear weapons, and was for a time president of the Pugwash Conferences on Science and World Affairs.

A poignant focus of the introduction was the dedication to Professor Sir Tom Kibble, a fellow Martin Ryle Trust trustee who was instrumental in setting up the lecture, and worked on its arrangements until his unexpected death earlier in the year. "For that reason, and in memory of his quiet and persistent commitment to social justice and peace, we dedicate this lecture to his memory. Thank you, Tom," said Dr Webber.

The trustees were delighted that the event attracted an audience of more than 150. Most stayed on for an enthusiastic discussion about the implications of the talk for present day conflicts and the prospects for peace, during which Sir Michael also reaffirmed the need for vigilance regarding nuclear weapons.

"Evidence suggests we're rather slow to learn from the past; but we should keep trying," he said.

"If I had to give a forecast for the future, it would be that it's better to be a failed optimist than a successful pessimist."

We would like to extend our thanks to Sir Michael Atiyah for his time and insights and to everyone who attended, especially the families of Tom Kibble and Martin Ryle.

By Vanessa Spedding, on behalf of the trustees of the Martin Ryle Trust. 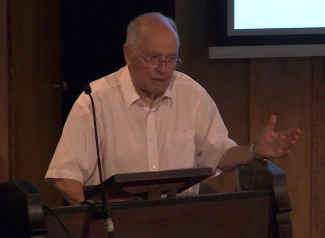